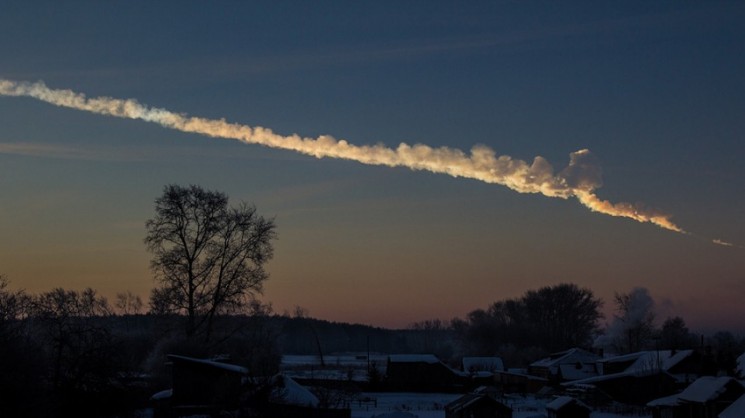 “And there shall be signs in the sun, and in the moon, and in the stars; and upon the earth distress of nations, with perplexity; the sea and the waves roaring. Men’s hearts failing them for fear, and for looking after those things which are coming on the earth: for the powers of heaven shall be shaken.” – Luke 21:25-26

Russia will complete a plan for a program to protect itself against threats from space by the end of this year, Civil Defense and Emergencies Minister Vladimir Puchkov said on Tuesday.

That comes a month after a meteorite entered the Earth?s atmosphere undetected by existing space-monitoring systems and slammed into Russia?s Urals on February 15, accompanied by a massive sonic boom that blew out windows and damaged thousands of buildings around the city of Chelyabinsk, injuring over 1,500.

?The relevant program will be approved by the end of the year, and we will begin its step-by-step implementation,? Puchkov said, adding the program will include early warning systems and public emergency training courses.

Federal Space Agency Roscosmos head Vladimir Popovkin proposed a federal body be put in charge of developing a system for averting the asteroid threat, adding that so far the activities of various government agencies lack coordination and do not have a uniform operating basis.

The Russian Academy of Sciences should be made responsible for developing asteroid threat monitoring systems, Popovkin said, while Roscosmos should be in charge of monitoring space debris and the Foreign Ministry should be entrusted with matters of countering space threats at interstate level.

Roscosmos is currently trying to identify and classify potentially dangerous space objects, Popovkin told a session of the Federation Council, the upper house of the Russian parliament.

Super-powerful telescopes should be used to detect dangerous space objects in good time, said Boris Shustov, director of the Russian Academy of Sciences Institute of Astronomy.

Ground and space-based systems need to be built for this, he said, adding ?regular? telescopes are unable to detect those threats.

In particular, he said Russia needs to complete construction of a super-wide-angle telescope, the AZT-33, near Lake Baikal, at a cost of 500 million rubles (about $17 million).

Shustov noted that the ?extraterrestrial object? which exploded over Chelyabinsk in February did not even belong in the class of dangerous objects.

If the Chelyabinsk meteorite had entered the atmosphere at a steeper trajectory the consequences would have been far worse, he said.

?And if the body had been 50 meters [in diameter] then there would have been no chance,? he said, without elaborating.

NASA estimated the meteorite was roughly 50 feet (15 meters) in diameter when it entered the atmosphere, travelling many times faster than the speed of sound, and exploded into a fireball brighter than the sun.