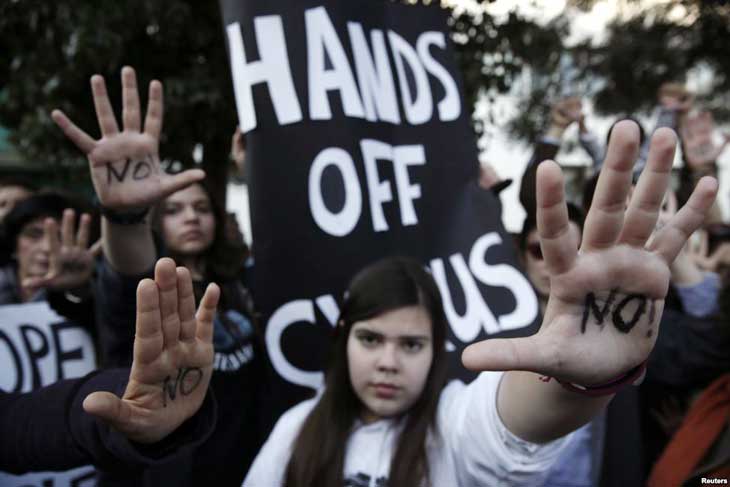 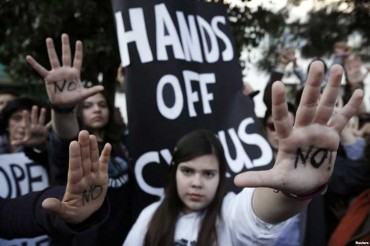 ATMs were drained over the weekend in Cyprus after European Union chiefs decided late Friday night to raid private savings accounts to help pay for the country’s $13 billion bailout.

Of course it was a holiday weekend and banks are closed on Monday, preventing a panicked bank run. It is now being reported that the Cypriot cabinet has extended the bank holiday until Thursday in an effort to calm the growing unrest. Electronic transfers have also been halted in order to prevent capital flight.

Riots are now being reported in Cyprus as citizens are furious at the Troika’s decision to rob the citizens to pay for the bad debts of banks.

The euro zone agreed on Saturday to hand Cyprus a bailout worth 10 billion euros ($13 billion), but demanded depositors in its banks forfeit some money to stave off bankruptcy despite the risk of a wider run on savings.
….
In a radical departure from previous aid packages – and one that gave rise to incredulity and anger across the country – euro zone finance ministers forced Cyprus’ savers to pay up to 10 percent of their deposits to raise almost 6 billion euros.

Cyprus president Nicos Anastasiades agreed to the deal, which completely reversed his previous assurances that it would not happen. It sets a very dangerous precedent for future bailouts. As if brutal austerity wasn’t enough, the EU is now demanding a bailout tax making citizens and expat depositors alike personally liable for government and private bank debts. Reuters also notes that according to a draft of the legislation, criminal penalties of up to 3 years in jail and 50,000 euros could be imposed upon anyone who doesn’t comply.

Most of the 10 billion euros will go to bail out Cypriot banks, which took a blow when their substantial holdings of Greek government bonds were written down as part of that country?s second bailout.

Britain has 60,000 depositors in Cypriot banks, including thousands of military and government personnel stationed on the island. George Osborne highlighted that Cypriot banks in England would not be subjected to the tax (6.75% for accounts under 100,000 Euros; 9.9% for those over 100,000), but expat depositors apparently will — government and military excluded:

George Osborne vowed today that those serving in Britain’s military or government in Cyprus will be protected after European finance chiefs ordered an unprecedented raid on personal bank accounts.

Up to 60,000 British savers are to lose thousands of pounds each as expats in Cyprus have their savings decimated in part of a painful bid to bail out the bankrupt island.

The Chancellor said the financial situation in Cyprus was ?an example of what happens if you don’t show the world that you can pay your way?, adding: ?We are not part of the bailout.? (Source)

The tax is being justified as a last-ditch effort to raise money and keep Cyprus from supposedly causing a domino effect across the Eurozone as indebted nations begin to collapse. Cyprus had set itself up as a strong banking center for investors, but many are outraged over Anastasiades’ about-face:

Those affected will include rich Russians with deposits in Cyprus and Europeans who have retired to the island, as well as Cypriots themselves.

“I’m furious,” said Chris Drake, a former Middle East correspondent for the BBC who lives in Cyprus. “There were plenty of opportunities to take our money out; we didn’t because we were promised it was a red line which would not be crossed.”

ZeroHedge is now reporting that it is those “rich Russians” who could wind up angriest. Eurogroup is suggesting that depositors under 100,000 euros should maintain their insurance against such a scheme, but it is possible that larger depositors will absorb their percentage by moving thetop percentage tax to 15.6%.

The Eurogroup will give Cyprus more flexibility on bank levy, and that Cyprus should safeguard depositors under ?100,000, even as the full ?5.8 billion deposit goal must still be hit.

(The) Russian response to the discovery that haircuts on big deposits just rose from 9.9% to over 15.6% will hardly be warm and cuddly. Now may be a good time to ban gun (and plutonium) sales to angry Russian billionaire oligarchs. (Source)

Cyprus is now the fifth country seeking a bailout, but the extraordinarily high depositor tax is unprecedented. Eurozone citizens and outside investors might not see the tax as the confidence-inspiring measure that government asserts it to be. Rather, citizens everywhere will view it as a clear signal that other governments are ready to follow suit and are extremely unclear about who will ultimately be affected, thus destroying confidence in the entire banking system. The “Russian billionaire” angle might be used to forestall more widespread outrage, but it is still new ground to go directly after depositors … and not all affected depositors will be Russian billionaires.

“This is theft, pure and simple,” one pensioner told Reuters. Yes it is.

A final vote from Cyprus’ parliament has been postponed until Monday. The latest poll shows that71% of Cypriots want to reject the scheme.

Follow #Cyprus depositors as they vent their fury through social media:

And for those who believe that something like this could not happen throughout Europe, or even in the United States, Tyler Durden of ZeroHedge posits that the Rubicon has been crossed and “wealth taxation” is a topic that is likely to grow in popularity among banking oligarchs. Although in the U.S. wealth taxation might take a slightly different form than what is being proposed for Cyprus.

So, if the US was to go the Cyprus route, and begin impairing balance sheet liabilities to remark assets, there would be precious little space (with just $4.3 trillion in total other funding liabilities), before one would need to start eating into the deposit base, should Congress decide to implement a very “fair and just” financial asset tax in the US next.

Will Congress do this? Obviously, nobody can answer that question now. However, it was “absolutely certain” as recently as 48 hours ago that Cyprus too would see no depositor “bail in” either. Then things changed rapidly. What is known, is that according to the same BCG chart we showed last night, the necessary debt-reduction needed in the US to reach a sustainable debt level, was over $8.2 trillion using debt numbers as of 2009…

… Since then consolidated US debt has risen by over $5 trillion.

Which means that if, indeed, the US proceeds with its own wealth tax, then deposits may well be one “wealth class” that gets impaired. Of course, since in the US other financial assets, namely the stock market, account for a far greater proportion of household net worth, it is quite possible that instead of impairing deposits at US banks, which already subsist solely due to the Fed’s $2 trillion in excess reserves, the government may instead choose to generously tax simply 30% of all of your stock holdings, and achieve the same “wealth transfer” result. (Source)

In fact, this type of asset taxation is already being proposed for Italy, as stated by Commerzbank’s chief economist, Jörg Krämer :

“A tax rate of 15% on financial assets would probably be enough to push the Italian government debt to below the critical level of 100% of gross domestic product.” So there you have it, the ‘new deal’ in Europe, as we warned, is ‘wealth taxes’ and testing the “capacity of Cypriots” appears to be the strawman on what the public will take before social unrest becomes intolerable. (Source)

One thing is for certain, banksters and their government partners are in no position to earn anyone’s trust.

Incidentally, why is any of this happening? Because a few rich eurocrats have decided that this is what is “fair.“