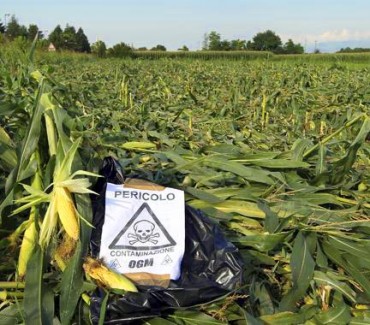 A U.S. Department of Agriculture (USDA) committee dominated by representatives from the biotechnology industry, seed companies, and academia has decided to make an official recommendation to the public agency that organic farmers be forced to bear financially responsible for the genetic contamination of their own organic crops by genetically-modified (GM) crops.

The USDA Advisory Committee on Biotechnology & 21st Century Agriculture, also known as AC21, is largely of the persuasion that agricultural coexistence means organic farmers should have to foot the bill when their fields are destroyed by unintentional GMO drift. According to an advisory report recently issued by the committee, this means requiring that organic farmers purchase their own crop insurance to pay for potential damages resulting from transgenic contamination.

“Of particular concern in the report is the recommendation that organic and non-GE conventional farmers pay to self-insure themselves against unwanted GE contamination,” said a recent statement issued by the National Organic Coalition (NOC). “This proposal allows USDA and the agricultural biotechnology industry to abdicate responsibility for preventing GE contamination while making the victims of GE pollution pay for damages resulting from transgenic contamination.”

Organic and conventional farmers have long had to deal with the threat of transgenic contamination from nearby GM crop fields, the pollen of which occasionally drifts or is carried by bees into organic crop fields. In the past, violated farmers have had to basically suck up their resultant losses, or even face litigation from the company whose seed materials trespassed onto their properties.

The contamination issue has become so problematic in recent years that a number of industry groups have tried to pursue so-called coexistence measures that, in some sort of alternate universe, would allow GMOs, conventional crops, and organic crops to peacefully coexist in harmony with one another. But as anyone with any knowledge of GM crops already knows, it is virtually impossible to contain GMOs and prevent their eventual spread.

With this in mind, AC21 seems fully aware of the fact that GMO spread and contamination is inevitable. Its solution to the problem; however, is not to restrain GMOs in any way, but rather to set them free and leave it to organic farmers to clean up the mess. And this, of course, is the apparent position of the federal government as well, which continues to unleash new and unnecessary GMOs like Monsanto’s GM alfalfa into the wild without any concern for the irreversible damage this will cause.

“We urgently need meaningful regulatory change that institutionalizes mandatory GE contamination prevention practices,” added the NOC about the inherent failures of the committee proposal. “USDA needs to stop dragging its heels, get serious and focus on making this happen.”