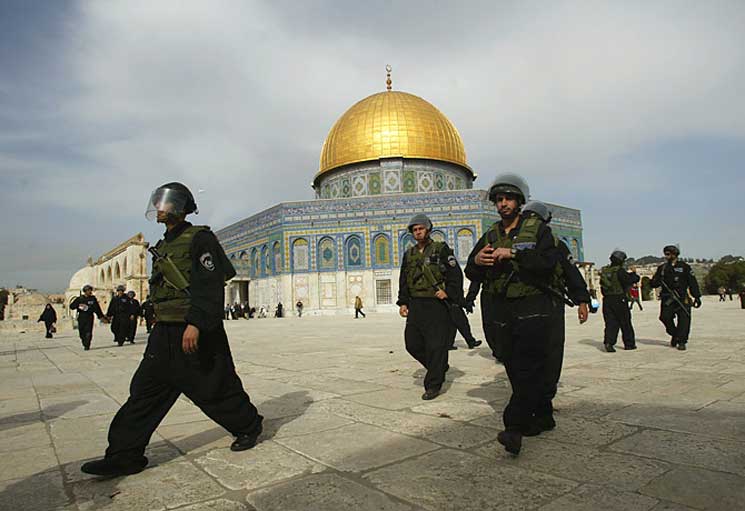 A major source of contention in the Israeli-Palestinian conflict is a hilltop in Jerusalem that Jews call the Temple Mount and Muslims call Al-Haram al-Sharif, or “the Noble Sanctuary.” The site is sacred to Jews as the location of the former Jewish Temple, last destroyed by the Romans in 70 A.D., and never rebuilt since. It is also one of the three most important shrines in Islam.

Today, Al-Haram al-Sharif encloses over 35 acres–nearly one-sixth of the old walled city of Jerusalem. Al-Aqsa Mosque stands at its southernmost end, and the smaller Muslim shrine, the Dome of the Rock, at its center. Muslims regard the entire area as holy. The sovereignty of the site and the status of Jerusalem are two of the greatest obstacles to lasting peace in the region.

Recent evidence of this is how a September 2000 visit to the site by then opposition leader Ariel Sharon, accompanied by hundreds of Israeli troops and riot police, sparked the worst series of riots and clashes between Israelis and Palestinians in over a decade.

When Jesus told His disciples what signs would lead up to His Second Coming, He referred to a prophecy in the Old Testament book of Daniel, written over 500 years earlier: “When you see the ‘abomination of desolation,’ spoken of by Daniel the prophet, standing in the holy place ? then there will be great tribulation, such as has not been since the beginning of the world until this time, no, nor ever shall be” (Matthew 24:15,21).

The prophecy Jesus was referring to says: “And forces shall be mustered by him, and they shall defile the sanctuary fortress; then they shall take away the daily sacrifices, and place there the abomination of desolation” (Daniel 11:31).

?         What Jesus called the “holy place” and Daniel called the “sanctuary fortress” (or “sanctuary of strength,” as the King James Version words it) is the Jewish Temple area.

?         The “him” in Daniel’s prophecy is the soon-coming world dictator known as the Antichrist (also called “the Beast” in the Bible’s book of Revelation).

?         “Daily sacrifices” refers to the ritual of Jewish faith in which the blood or flesh of a specified animal is offered in the Temple to God as a substitute payment for sin. This primary ritual of the Jewish faith was suspended when the second Temple was destroyed.

?         The “abomination of desolation” appears to be an image or large statue of the Antichrist.

?         The “great tribulation” Jesus spoke of is the last three and a half years before His return, when the Antichrist will officially abolish all religions other than worship of himself and will persecute believers of all faiths. This will spark rebellions against his regime, which he will brutally attempt to suppress.

Obviously some things need to happen before these prophecies can be fulfilled.

The Jews have not sacrificed animals to God since their Temple was last destroyed in 70 A.D., and the only place where they would consider resuming sacrificial worship is on the Temple Mount in Jerusalem–the site now occupied by the Muslims’ Dome of the Rock.

Before the Antichrist can take away the daily sacrifices, sacrifices must resume. Before the sacrifices can resume, there must be a Jewish Temple. For the Temple to be rebuilt, something has got to give. Either the Dome of the Rock must come down, or the Jews must agree to rebuild their Temple elsewhere–possibly on another part of the Temple Mount. With both sides refusing to budge on the issue of sovereignty over the Temple Mount, it would take a superman to broker a deal.

“This king [the Antichrist] will make a seven-year treaty with the people, but after half that time, he will break his pledge and stop the Jews from all their sacrifices and their offerings” (Daniel 9:27 TLB).

This seven-year treaty is referred to again in Daniel 11:28-31–the same passage that Jesus referred to–as a “holy covenant” because it has to do with religion. It will most likely be a pact between the Antichrist, the Jews, the Muslims, and the Christians by which Jerusalem is declared an international city, with free and equal access guaranteed to people of all faiths.

The Jews will finally be able to rebuild their Temple and reinstate sacrificial worship, and for three and a half years things will seem to get better. Apparently the Antichrist will also make Jerusalem the capital of his one-world government, because the Bible says that eventually he will run things from the Jewish Temple (2 Thessalonians 2:4).

“But in the middle of the week [seven years] he shall bring an end to sacrifice and offering” (Daniel 9:27). Then, in that holy place, the Temple area, the world government will erect some kind of “living” image of the Antichrist (possibly a computer of some sort), the abomination of desolation, and demand that the whole world worship the image or be killed (Revelation 13:14-15).

“Let no one deceive you by any means; for that Day [the Second Coming of Jesus Christ] will not come unless ? the man of sin [the Antichrist] is revealed, the son of perdition, who opposes and exalts himself above all that is called God or that is worshiped, so that he sits as God in the temple of God, showing himself that he is God” (2 Thessalonians 2:3-4).

The world situation–particularly in the Middle East–is going to continue to get worse until the Covenant is signed. Then things are going to appear to get better for a while under the false messiah, the Antichrist. Then things will get much worse during the Great Tribulation. But after the Tribulation, when Jesus returns to rescue His own and whisk them off to Heaven, things are going to be the best ever for those who have received Him as their Savior! That’s what we will need to hold on to as things get worse–the promised happy ending!