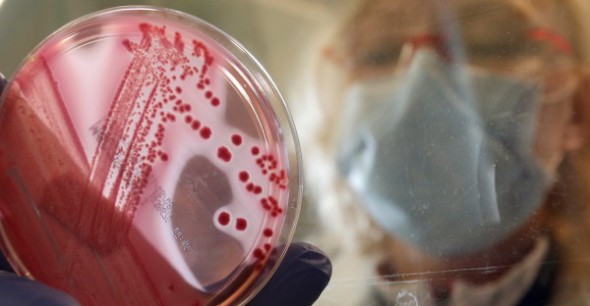 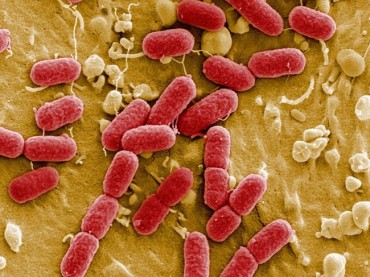 Even as the veggie blame game is now under way across the EU, where a super resistant strain of e.coli is sickening patients and filling hospitals in Germany, virtually no one is talking about how e.coli could have magically become resistant to eight different classes of antibiotic drugs and then suddenly appeared in the food supply.

This particular e.coli variation is a member of the O104 strain, and O104 strains are almost never (normally) resistant to antibiotics. In order for them to acquire this resistance, they must be repeatedly exposed to antibiotics in order to provide the “mutation pressure” that nudges them toward complete drug immunity.

So if you’re curious about the origins of such a strain, you can essentially reverse engineer the genetic code of the e.coli and determine fairly accurately which antibiotics it was exposed to during its development. This step has now been done (see below), and when you look at the genetic decoding of this O104 strain now threatening food consumers across the EU, a fascinating picture emerges of how it must have come into existence.

The genetic code reveals the history

When scientists at Germany’s Robert Koch Institute decoded the genetic makeup of the O104 strain, they found it to be resistant to all the following classes and combinations of antibiotics:

In addition, this O104 strain posses an ability to produce special enzymes that give it what might be called “bacteria superpowers” known technically as ESBLs:

“Extended-Spectrum Beta-Lactamases (ESBLs) are enzymes that can be produced by bacteria making them resistant to cephalosporins e.g. cefuroxime, cefotaxime and ceftazidime – which are the most widely used antibiotics in many hospitals,” explains the Health Protection Agency in the UK (http://www.hpa.org.uk/Topics/Infect…).

On top of that, this O104 strain possesses two genes — TEM-1 and CTX-M-15 — that “have been making doctors shudder since the 1990s,” reports The Guardian (http://www.guardian.co.uk/commentis…). And why do they make doctors shudder? Because they’re so deadly that many people infected with such bacteria experience critical organ failure and simply die.

So how, exactly, does a bacterial strain come into existence that’s resistant to over a dozen antibiotics in eight different drug classes and features two deadly gene mutations plus ESBL enzyme capabilities?

Although the actual process is more complicated than this, the upshot is that creating a strain of e.coli that’s resistant to eight classes of antibiotics requires repeated, sustained expose to those antibiotics. It is virtually impossible to imagine how this could happen all by itself in the natural world. For example, if this bacteria originated in the food (as we’ve been told), then where did it acquire all this antibiotic resistance given the fact that antibiotics are not used in vegetables?

When considering the genetic evidence that now confronts us, it is difficult to imagine how this could happen “in the wild.” While resistance to a single antibiotic is common, the creation of a strain of e.coli that’s resistant to eight different classes of antibiotics — in combination — simply defies the laws of genetic permutation and combination in the wild. Simply put, this superbug e.coli strain could not have been created in the wild. And that leaves only one explanation for where it really came from: the lab.

Engineered and then released into the wild

The evidence now points to this deadly strain of e.coli being engineered and then either being released into the food supply or somehow escaping from a lab and entering the food supply inadvertently. If you disagree with that conclusion — and you’re certainly welcome to — then you are forced to conclude that this octobiotic superbug (immune to eight classes of antibiotics) developed randomly on its own… and that conclusion is far scarier than the “bioengineered” explanation because it means octobiotic superbugs can simply appear anywhere at any time without cause. That would be quite an exotic theory indeed.

My conclusion actually makes more sense: This strain of e.coli was almost certainly engineered and then released into the food supply for a specific purpose. What would that purpose be? It’s obvious, I hope.

It’s all problem, reaction, solution at work here. First cause a PROBLEM (a deadly strain of e.coli in the food supply). Then wait for the public REACTION (huge outcry as the population is terrorized by e.coli). In response to that, enact your desired SOLUTION (total control over the global food supply and the outlawing of raw sprouts, raw milk and raw vegetables).

That’s what this is all about, of course. The FDA relied on the same phenomenon in the USA when pushing for its recent “Food Safety Modernization Act” which essentially outlaws small family organic farms unless they lick the boots of FDA regulators. The FDA was able to crush farm freedom in America by piggybacking on the widespread fear that followed e.coli outbreaks in the U.S. food supply. When people are afraid, remember, it’s not difficult to get them to agree to almost any level of regulatory tyranny. And making people afraid of their food is a simple matter… a few government press releases emailed to the mainstream media news affiliates is all it takes.

First ban the natural medicine, then attack the food supply

Now, remember: All this is happening on the heels of the EU ban on medicinal herbs and nutritional supplements — a ban that blatantly outlaws nutritional therapies that help keep people healthy and free from disease. Now that all these herbs and supplements are outlawed, the next step is to make people afraid of fresh food, too. That’s because fresh vegetables are medicinal, and as long as the public has the right to buy fresh vegetables, they can always prevent disease.

But if you can make people AFRAID of fresh vegetables — or even outlaw them altogether — then you can force the entire population onto a diet of dead foods and processed foods that promote degenerative disease and bolster the profits of the powerful drug companies.

It’s all part of the same agenda, you see: Keep people sick, deny them access to healing herbs and supplements, then profit from their suffering at the hands of the global drug cartels.

GMOs play a similar role in all this, of course: They’re designed to contaminate the food supply with genetic code that causes widespread infertility among human beings. And those who are somehow able to reproduce after exposure to GMOs still suffer from degenerative disease that enriches the drug companies from “treatment.”

Do you recall which country was targeted in this recent e.coli scare? Spain. Why Spain? You may recall that leaked cables from Wikileaks revealed that Spain resisted the introduction of GMOs into its agricultural system, even as the U.S. government covertly threatened political retaliation for its resistance. This false blaming of Spain for the e.coli deaths is probably retaliation for Spain’s unwillingness to jump on the GMO bandwagon. (http://www.naturalnews.com/030828_G…)

That’s the real story behind the economic devastation of Spain’s vegetable farmers. It’s one of the subplots being pursued alongside this e.coli superbug scheme.

Food as weapons of war – created by Big Pharma?

By the way, the most likely explanation of where this strain of e.coli was bioengineered is that the drug giants came up with it in their own labs. Who else has access to all the antibiotics and equipment needed to manage the targeted mutations of potentially thousands of e.coli colonies? The drug companies are uniquely positioned to both carry out this plot and profit from it. In other words, they have the means and the motive to engage in precisely such actions.

Aside from the drug companies, perhaps only the infectious disease regulators themselves have this kind of laboratory capacity. The CDC, for example, could probably pull this off if they really wanted to.

The proof that somebody bioengineered this e.coli strain is written right in the DNA of the bacteria. That’s forensic evidence, and what it reveals cannot be denied. This strain underwent repeated and prolonged exposure to eight different classes of antibiotics, and then it somehow managed to appear in the food supply. How do you get to that if not through a well-planned scheme carried out by rogue scientists? There is no such thing as “spontaneous mutation” into a strain that is resistant to the top eight classes of brand-name antibiotic drugs being sold by Big Pharma today. Such mutations have to be deliberate.

Once again, if you disagree with this assessment, then what you’re saying is that NO, it wasn’t done deliberately… it happened accidentally! And again, I’m saying that’s even scarier! Because that means the antibiotic contamination of our world is now at such an extreme level of overkill that a strain of e.coli in the wild can be saturated with eight different classes of antibiotics to the point where it naturally develops into its own deadly superbug. If that’s what people believe, then that’s almost a scarier theory than the bioengineering explanation!

A new era has begun: Bioweapons in your food

But in either case — no matter what you believe — the simple truth is that the world is now facing a new era of global superbug strains of bacteria that can’t be treated with any known pharmaceutical. They can all, of course, be readily killed with colloidal silver, which is exactly why the FDA and world health regulators have viciously attacked colloidal silver companies all these years: They can’t have the public getting its hands on natural antibiotics that really work, you see. That would defeat the whole purpose of making everybody sick in the first place.

In fact, these strains of e.coli superbugs can be quite readily treated with a combination of natural full-spectrum antibiotics from plants such as garlic, ginger, onions and medicinal herbs. On top of that, probiotics can help balance the flora of the digestive tract and “crowd out” the deadly e.coli that might happen by. A healthy immune system and well-functioning digestive tract can fight off an e.coli superbug infection, but that’s yet another fact the medical community doesn’t want you to know. They much prefer you to remain a helpless victim lying in the hospital, waiting to die, with no options available to you. That’s “modern medicine” for ya. They cause the problems that they claim to treat, and then they won’t even treat you with anything that works in the first place.

Nearly all the deaths now attributable to this e.coli outbreak are easily and readily avoidable. These are deaths of ignorance. But even more, they may also be deaths from a new era of food-based bioweapons unleashed by either a group of mad scientists or an agenda-driven institution that has declared war on the human population.

Additional developments on this e.coli outbreak

? 22 fatalities have so far been reported, with 2,153 people now sickened and possibly facing kidney failure.

? An agricultural ministry in Germany said that even though they now know the source of the outbreak is a German sprout farm, they are still not lifting their warnings for people to avoid eating tomatoes and lettuce. In other words, keep the people afraid!

? “The German variant of E coli, known as O104, is a hybrid of the strains that can cause bloody diarrhoea and kidney damage called ‘hemolytic uremic syndrome’.” (http://www.independent.ie/world-new…)

? A total of ten European nations have reported outbreaks of this e.coli strain, mostly from people who had visited northern Germany.