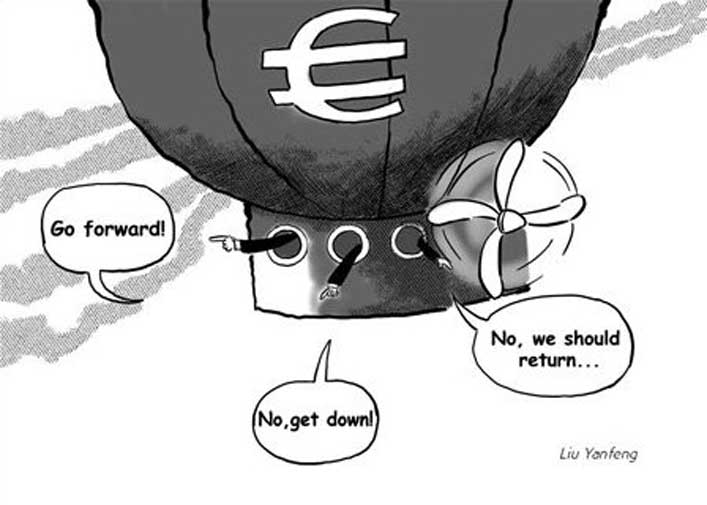 Endtimeinfo: The Bible tells us that the coming world government will bring with it a new economic system where noone will be able to buy or sell without being marked (Revelation 13:16-18). To accomplish this, it is important to introduce a single currency, a common unit of measure for the whole world. So whether an existing currency will become global or a new one will be introduced, the goal is to have the whole world become part of the same system. 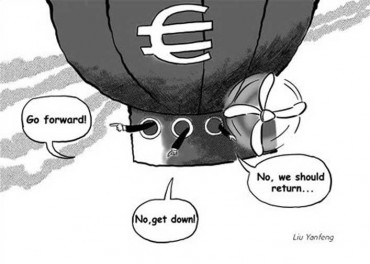 As more and more countries within the European Union struggle economically, the euro – the union’s common currency – becomes more embattled, with its founder now even predicting its demise.

German Finance Minister Oskar Lafontaine, who was responsible for the euro’s development and launch, is now calling for the end of the single currency in order to let southern Europe recover. He says if not, the current fiscal course is “leading to disaster.”

“The economic situation is worsening from month to month, and unemployment has reached a level that puts democratic structures ever more in doubt,” he said, according to the Telegraph, one of Britain’s largest dailies.

“The Germans have not yet realized that southern Europe, including France, will be forced by their current misery to fight back against German hegemony sooner or later,” he said, adding that much of the current fiscal crisis has come in large part from Germany’s squeeze on wages, in order to gain export share.

On the parliamentary website of Germany’s Left Party, Lafontaine said German Chancellor Angela Merkel will “awake from her self-righteous slumber” once the European countries in economic dire straits come together to force changes in crisis policy, at the expense of Germany.

Lafontaine’s dire prediction appeared to gain credibility as French Finance Minister Pierre Moscovici “proclaimed the end of austerity and a triumph of French policy, risking further damage to the tattered relations between Paris and Berlin,” the paper reported.

“Austerity is finished. This is a decisive turn in the history of the EU project since the euro,” Moscovici told French TV. “We’re seeing the end of austerity dogma. It’s a victory of the French point of view.”

The French minister’s comments came on the heels of a deal with Brussels giving France and Spain an additional two years to meet deficit targets of 3 percent of GDP. But his triumphant tone could mean that hardliners in Berlin will become angry, confirming fears that such concessions will only lead to more fiscal chaos in the months ahead.

In early May German Vice-Chancellor Philipp Rosler attacked the European Commission, calling its decision to undermine the necessary belt-tightening “irresponsible.”

Whether the current breakdown of the German-Franco alliance that has driven politics on the continent for more than a half-century is the fault of Berlin or Paris may be irrelevant at this point, but clearly the situation is spiraling out of control. France’s Socialist Party – which now controls the prime minister’s office – lashed out at the “selfish intransigence” of Merkel, accusing her of thinking over of “German savers, her trade balance, and her electoral future.”

For his part, Lafontaine said he backs EMU but just doesn’t think it is sustainable.

“Hopes that the creation of the euro would force rational economic behavior on all sides were in vain,” he said, noting that the policy of forcing Spain, Portugal, and Greece to carry out internal devaluations was a “catastrophe.” The economies of those three nations, plus Ireland and Holland, are among the EU’s worst.

The euro has been in decline for months now, and as nations of the EU continue to deal with high unemployment and high government spending due to overpromising of benefits and lower revenues, there doesn’t seem to be a future for the currency, much less the EU as a viable entity, experts believe.

Fundamental flaws in the euro’s design

Here are some of the euro’s basic flaws:

Money is too tight. The euro zone is not what economists would label an optimal place for currency. “In other words,” Atlantic Monthly says, “it was a bad idea.” Part of the reason why is because the various EU members should have different monetary policies but they don’t.

Budgets are too tight. Experts believe austerity has been an utter failure, if not outright disaster, because it has actually increased debt burdens across southern Europe especially. “The euro has become an austerity suicide pact.”

Not enough trade. Save Germany, a little more than half of the EU’s nations primarily trade with each other. As southern Europe slides into depression and northern Europe edges toward recession, each will purchase even less from the others.

As with all socialist countries, the nations of Europe simply do not have enough resources to continue providing cradle-to-grave services for their people. That is angering to tens of millions who have been raised to believe that the European money pit is bottomless but who are now realizing the fallacy of such thinking.

As an aside, it is important to note that both world wars last century began on a tumultuous European continent.