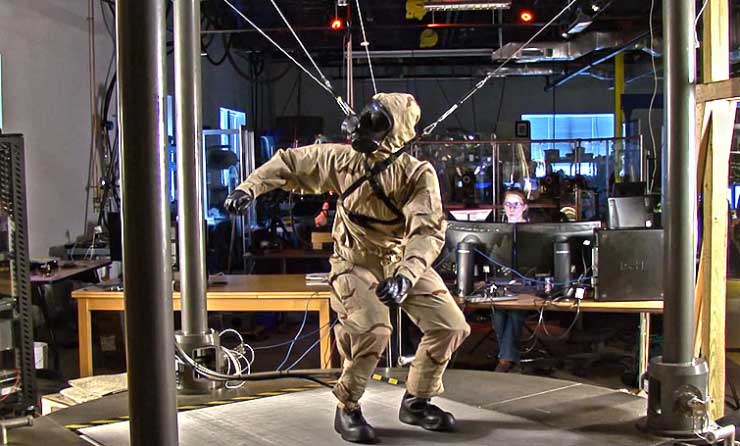 The new incarnation of Boston Dynamics? PETMAN robot, being developed for DARPA with Department of Defense funding, not only looks human but it also sweats to regulate body temperature.

A new video showing PETMAN in action depicts the robot dressed up in a post-apocalyptic chem-bio suit with sensors embedded to detect hazardous chemicals.

When the clothing is removed, the robot looks something like Sonny from the movie I, Robot. PETMAN is self-balancing and can also do push-ups, walk, stretch, and squat.

As you can see from the previous incarnations of PETMAN in the videos below, as the robot?s capabilities increase, so does its resemblance to a human being.

That will only serve to increase concerns expressed by numerous robotic experts, that the Pentagon?s fleet of cyborgs is being developed with one primary goal in mind ? to pursue ?suspects? and kill large numbers of people on the future battlefield.

Noel Sharkey, professor of artificial intelligence and robotics at the University of Sheffield, has repeatedly warned that the robots currently being developed under the auspices of DARPA will eventually be used to kill.

?Of course if it?s used for combat, it would be killing civilians as well as it?s not going to be able to discriminate between civilians and soldiers,? said Sharkey.

Last month, award-winning military writer and former intelligence officer Lt. Col. Douglas Pryer also wrote an essay warning of the threat posed by remorseless ?killer robots? that will be used to stalk and slaughter human targets in the near future.

Last year, experts at the prestigious University of Cambridge announced a project to conduct research into the ?extinction-level risks? posed to humanity by artificially intelligent robots.

Flying drones that communicate with each other are also being developed for ?hunting terrorists? and other ?homeland security? purposes, as well as UAVs that could one day snatch humans off the street.