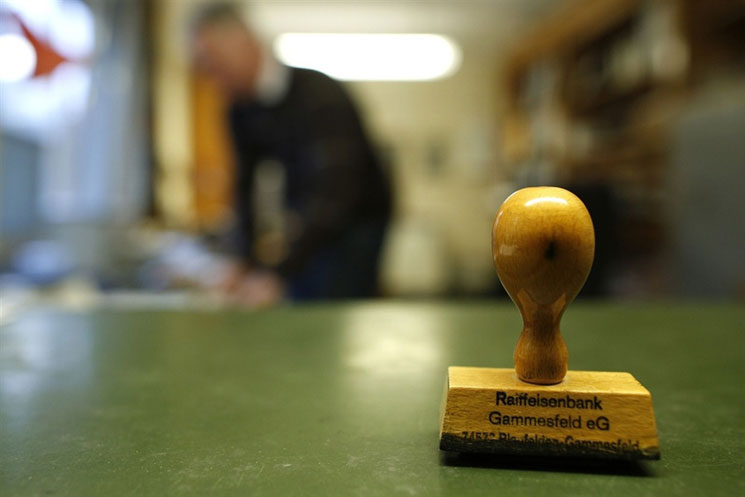 GAMMESFELD, Germany (Reuters)?Peter Breiter, 41, is an unusual banker. Not for him the big bonuses, complicated financial instruments and multi-million deals.

He is happy instead writing transaction slips out by hand for the 500 inhabitants of the tiny southern German village of Gammesfeld.

?Why would I use a cash machine?? said Friedrich Feldmann, a customer sitting in the bank?s small waiting room on his once-weekly visit to withdraw cash. ?They cost money anyway.?

The Raiffeisen Gammesfeld eG cooperative bank in southern Germany is one of the country?s 10 smallest banks by deposits and is the only one to be run by just one member of staff.

Small banks like this dominate the German banking landscape. Rooted in communities, they offer a limited range of accounts and loans to personal and local business customers.

While numbers have shrunk from around 7,000 in the 1970s to around 1,100 now, cooperative banks like Raiffeisen Gammesfeld provide competition for Germany?s two largest banks?Deutsche Bank and Commerzbank.

A typical day?s work for Breiter involves providing villagers with cash for their day-to-day needs and arranging small loans for local businesses. Not to mention cleaning the one-story building that houses the bank, which is 200 meters from his own front door.

Moving from a bigger bank, where it was all ?sell, sell, sell?, Gammesfeld-born Breiter says taking up this job in 2008 was the best decision he ever made.

The advertisement required someone to work by hand, without computers. The typewriter and the adding machine bear the signs of constant use, although Breiter, in his standard work outfit of jeans and jumper, does now have a computer.

?It?s so much fun,? Breiter, a keen mathematician, says as he deals with a steady stream of lunchtime customers. He knows his customers by name and regularly offers advice on jobs, relationship and money woes.

?People said I would get bored, but I?m not,? he said.

Breiter doesn?t even mind that he gets barely any holiday each year, saying he is happy to settle for weekends skiing in the mountains nearby. ?My hobby is my job. What could be finer??

The cooperatives? existence is entwined closely with that of the Mittelstand, Germany?s medium-sized and often family-run firms responsible for much of its export success.

?The Mittelstand is the lifeblood of Germany, and these are often our customers,? Steffen Steudel, a spokesman for the BVR cooperative banking group association told Reuters.

While many cooperative banks took a hit from the financial crisis, they fared better than some banks because they had mostly not tried to expand too quickly or take on too much risk-laden business.

The shock of seeing big banks go bust has also sparked renewed interest in the cooperatives, seen as steady and reliable, according to the BVR.

?Just as consumers want to know where their food is coming from, they also want to see what the bank is doing with their money,? Steudel said.

Breiter also says people have called to ask how they too can recreate Gammesfeld in their own village, although he says that the model is impossible to start from scratch today because of the sums of money that would be needed.

Breiter is also proud that Gammesfeld is there to serve the community and not just make profit. Each customer is offered the same interest rate, whether they earn 1,000 or 10,000 euros a month.