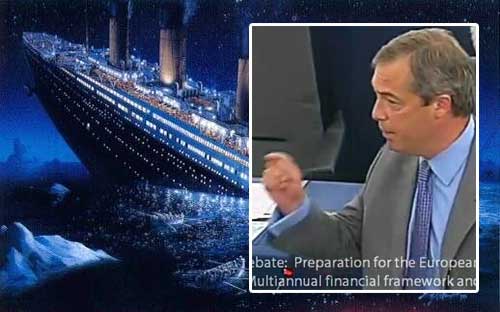 In an epic rant, trumping Biderman, UKIP’s Nigel Farage appears to have reached the limit of his frustration with his ‘peers’ in the European Parliament after the Spanish bailout. Rajoy’s proclamation that this bailout shows what a success the euro-zone has been, sends Farage over the edge as he sees the Spaniard as just about the most incompetent leader in the whole of Europe (up there with favorites like Van Rompuy and Barroso). The erudite Englishman notes that by any objective criteria “The Euro Has Failed” expanding on the insane farce of Italy funding Spain’s banking bailout at a loss (borrowing at 6% to fund a loan at 3% as we discussed here).

“This ‘genius’ deal makes things worse not better” as it merely drives other nations towards needing bailouts themselves and while his socialist colleagues in the room are mumbling and checking their blackberries, he reminds them that Spanish national debt will surge and that 100 billion does not solve the problem, and that if Greece leaves, the ECB is failed, is gone, and to rectify this there will be a cash call from the very same PIIS (Ex-G) that are tumbling towards the abyss. Blood pressure surges as he screams “you couldn’t make this up” concluding that “the Euro Titanic has now hit the Iceberg and sadly there simply aren’t enough lifeboats.“