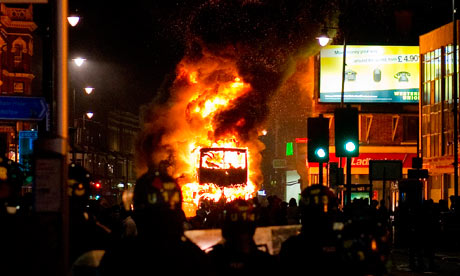 This behavior ensures the public will overwhelmingly support whatever measures are proposed to deal with them, even to the point of outright martial law 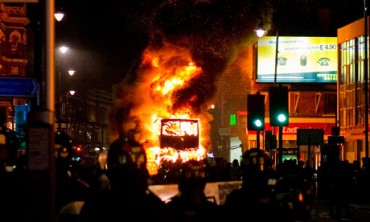 Following numerous reports of failures on behalf of police to arrest looters or adequately respond to the riots in London that are now sweeping across the entire UK, curfews and troops on the streets are now being readied as authorities prepare to enforce martial law to quell massive civil unrest.

BBC News twice reported this morning that troops were being readied. The statement was first made by a reporter at 8:30am and then repeated by a Metropolitan Police representative who said ?all options were on the table?.

U.K. Home Secretary Theresa May confirms that the government is considering ?military support for the police?.

Curfews are also being discussed as authorities prepare to transform Britain into a locked down police state.

?Armoured vehicles have been brought in to clear the streets for the first time by police to tackle what senior officers say is the worst rioting and looting in living memory,? reports the Guardian.

?I have not heard of a curfew on mainland Britain in the past century. [It’s] very difficult to impose. I?m not saying that it is definitely the way forward but it is something we have to consider,? Diane Abbott, Labour MP for Hackney North and Stoke Newington told BBC Breakfast.

Former London mayor Ken Livingstone called for police to use water cannons to disperse the rioters.

Having started in poorer areas of London, the riots have now spread to other major cities including Bristol, Nottingham, Liverpool and Manchester.

There can be little doubt that the vast majority of the rioters are products of the country?s broken society, nihilistic youths who care little about political grievances and are primarily focused with exploiting the chaos to steal as much booty as they possibly can while getting off on mindless violence. This behavior ensures the public will overwhelmingly support whatever measures are proposed to deal with them, even to the point of outright martial law.

These youths should not be seen as the vanguard of some kind of genuine revolution against an abusive system. If that were the case they would be rioting outside of Downing Street, the Houses of Parliament and Buckingham Palace. Instead they are burning down private homes and businesses while looting high-end electrical goods and clothing.

But what has exacerbated the situation is the lackluster police response, with numerous reports from the public that police stood back and allowed looters to pillage both large department stores and private small businesses for hours on end.

During the initial riots in Tottenham on Sunday night, police were criticized for ?standing back and allowing rioters to cause havoc.? This trend has continued throughout the three nights of mayhem, with eyewitnesses bewildered at how the police have obviously been ordered not to arrest looters and rioters in some instances.

We have been predicting the onset of widespread rioting and civil unrest for years, particularly in the UK. Last year we wrote that crippling austerity cuts would force the economically deprived to ?take to the streets with a mind set of nothing to lose if the government handouts they have become dependent on are drastically reduced.?

Make no mistake about it, these riots will be hastily exploited by the system to turn Britain into an even more controlled and surveilled police state than it already is. The riots achieve absolutely nothing aside from making the establishment look reasonable in whatever response it takes, measures which will be fully supported by a public bombarded with images of chaos, looting and burning.