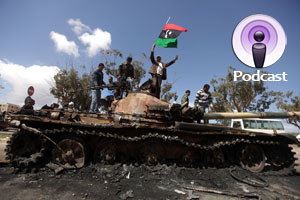 The world is watching as US and NATO forces advance on Muammar Gaddafi?s army while the mainstream media cheers on. Why Libya? Why now? There are plenty of conflicts elsewhere in the Middle East and Africa. Why pick this country?

Could this attack have a greater significance? The Book of Daniel in the Bible has some very specific verses on Libya itself and where this war could lead to. Could this be the beginning of the end?

With each day passing the picture is getting clearer. Pieces of the great puzzle are put in place one after the other and the stage is being set for the final, cataclysmic events of our history.

Joseph and Johnny discuss how these current events taking place in the Middle-East could tie in to some specific prophesies in the Bible and in part 2 get into more details regarding the wars predicted in the Book of Daniel.