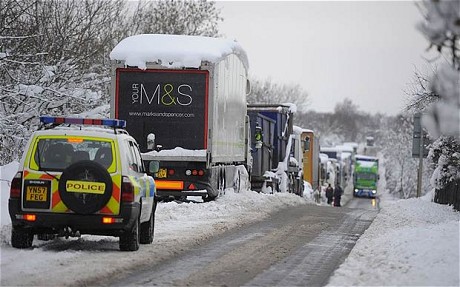 Britain’s economy shrank unexpectedly in the final three months of the year as heavy snow compounded a slowdown in growth. 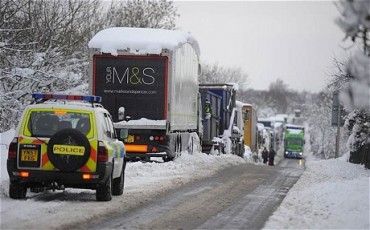 Gross domestic product fell 0.5pc in the fourth quarter, the most in more than a year, the Office for National Statistics reported on Tuesday. The decline compared with growth of 0.7pc in the third quarter.

The news sent the pound sliding and pushed shares lower in London, reigniting fears of a double dip recession as the Coalition begins its austerity drive.

“This is a horrendous figure. An absolute disaster for the economy,” said Hetal Mehta, an economist at Daiwa Capital Markets Europe.

“We knew that retail sales were heavily affected and that services output would be weak, but the collapse in construction was a major contributor the downside surprise.”

Construction, which boosted growth in the second and third quarters, dropped 3.3pc, while services slid 0.5pc.

Economists had only expected growth to slow to 0.5pc after 0.7pc growth in the third quarter, though uncertainty over the impact of December’s snow disruption meant the range of forecasts was wide, ranging from 0.1pc-0.6pc.

The figures are expected to reinforce the Bank of England’s belief that now is not the time to raise interest rates, even though inflation is likely to be double its 2pc target within a few months.

They will also add to pressure on the Government to ease back on its drive to cut public spending.

However, George Osborne, the Finance Minister, said the Coalition would not be blown off course by bad weather.

“We are very clear that to change our budget plans on the back of these weak figures and the bad weather would be a huge mistake because that would push us back into a financial crisis,” he said.

Economists said the ONS estimated that weather effects knocked about 0.5pc off GDP in final three months of 2010, so even if its impact was stripped out growth is significantly weaker than expected.

Brendan Barber, General Secretary of the TUC, said: “Bad weather or not, these are truly awful figures, much worse than anyone expected. The government has a reverse Midas touch turning respectable growth figures into one of the sharpest falls on record.

?When this collapse works its way into the jobs market the impact will be severe. To implement drastic spending cuts when every sector bar production is in decline will hit business, send unemployment spiralling and make closing the deficit more difficult, not less.”
Britain’s public-sector net borrowing rose from a year ago to its highest December reading on record, though it fell from the all-time record reached in November.