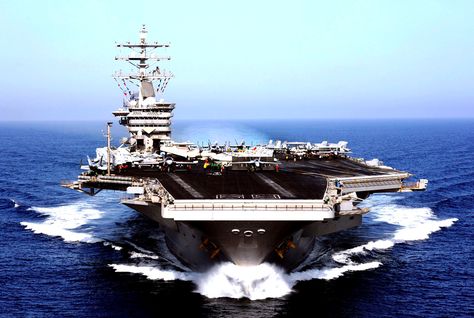 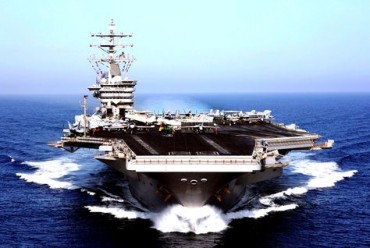 Amidst Turkey getting NATO approval to line up Patriot anti-missile systems on its border and with US officials indicating that the consequence of President Bashar Al-Assad using chemical weapons will be military intervention, the USS Eisenhower has arrived off the coast of Syria to send a clear signal that direct confrontation could be near.

The aircraft carrier, which boasts 8 fighter bomber squadrons and 8,000 sailors, airmen and Marines, sailed up to the Syrian coast yesterday during bad weather. The Eisenhower is joined by the USS Iwo Jima Amphibious Ready Group which carries another 2,500 Marines.

?Facing Syria now are 10,000 US fighting men, 70 fighter-bombers and at least 17 warships, including the three Iwo Jima amphibious craft, a guided missile cruiser and 10 destroyers and frigates. Four of these vessels are armed with Aegis missile interceptors,? reports DebkaFile.

Reports of the USS Eisenhower reaching Syria arrive after an unnamed US official stated, ?We have (US) special operations forces at the right posture, they don?t have to be sent.? The Australian reported that this suggests, ?those troops are already in the region.?

Yesterday, Turkey received the go ahead from NATO to install Patriot anti-missile systems in the name of defending against cross border attacks by the Assad regime. However, some see the move as merely another step towards a no fly zone over Syria which Turkey has been requesting for months.

The Patriot missiles are land-based but they are now backed up by the THAD and Aegis systems, which can shoot down short, medium, and intermediate ballistic missiles from the sea.

The USS Eisenhower?s arrival near Syria coincides with an intensification of hype over the last 48 hours suggesting that the Assad regime is preparing to use chemical weapons against opposition fighters, many of whom are Al-Qaeda terrorists who killed U.S. troops in Iraq yet have received the backing of the Obama administration.

?It won?t require major movement to make action happen,? a US official told the London Times yesterday. ?The muscle is already there to be flexed. It?s premature to say what could happen if a decision is made to intervene. That hasn?t taken shape, we?ve not reached that kind of decision. There are a lot of options, but it [military action] could be launched rapidly, within days,? he added.

Geopolitical experts like Pepe Escobar have dismissed the notion that Syria is preparing to use its chemical weapons arsenal as a crude propaganda stunt by NATO powers.

Indeed, reports circulated 6 months ago that rebel fighters had been given gas masks and were willing to stage a chemical weapons attack which would then be blamed on the Assad regime and grease the skids for NATO military intervention.

In August, a source told Syrian news channel Addounia that a Saudi company had fitted 1400 ambulance vehicles with anti-gas & anti-chemical filtering systems at a cost of $97,000 dollars each, in preparation for a chemical weapons attack carried out by FSA rebels using mortar rounds. A further 400 vehicles were prepared as troop carriers.

The attack would be blamed on the Syrian Army and exploited as an excuse for a military assault. A March 2012 Brookings Institution report entitled Saving Syria: Assessing Options For Regime Change outlined this very scenario– where a manufactured humanitarian crisis would be cited as justification for force.

The story coincided with a speech by French President Francois Hollande in which he asserted that a chemical weapons attack ?would be a legitimate reason for direct intervention? by NATO powers.

The arrival of the aircraft carrier signals that ?The United States now stands ready for direct military intervention in the Syrian conflict when the weather permits,? according to DebkaFile.