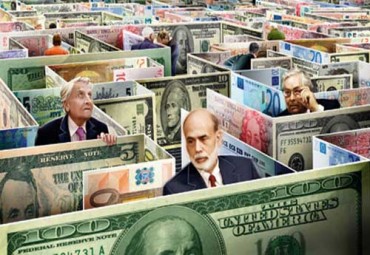 It’s time to admit that we live in a false economy. Smoke and mirrors are used to make us believe the economy is real, but it’s all an elaborate illusion.

Out of one side of the establishment’s mouth we hear excitement about “green shoots”, and out of the other side comes breathless warnings of fiscal cliffs and the urgent need for unlimited bailouts by the Fed.

We hear the people begging for jobs and the politicians promising them, but politicians can’t create jobs. We see people camped out to buy stuff on Black Friday indicating the consumer economy is seemingly thriving, only to find out everything was bought on credit.

The corporate media does their best to distract us from seeing anything real. We see the media glorify Kim Kardashian who got rich by being famous, and became famous merely by being rich. She got front page coverage on Huffington Post this week because her cat died.  Enough said.

Meanwhile the financial media makes the economy seem complicated and they ban anyone who speaks truthfully about the economy from their airwaves.

Is it any wonder why people are angry and confused about the economy?

Well, hopefully these signs that we live in a false economy will help clear up some of that confusion.

1. Fake Jobs: It’s not just that the “official” unemployment numbers are a fraud, the actual jobs are fake as well. Ask yourself how many professions actually produce something of value? 80% of jobs could disappear tomorrow and it wouldn’t affect basic human survival or happiness in the least. Yes, in our society we need money to survive – and jobs equal money – but that doesn’t mean a “job” has any actual benefit to society.  More on this in the next point…

2. Problems Create Jobs, Not Solutions: We can’t fix real problems, because it would destroy more fake jobs. We can’t end the wars and bring all of the personnel home when the jobless rate is already suffering. We can’t end the War on Drugs because where would the DEA agents, prison guards, the court system, parole officers, and the rest of their support staff work. We can’t simplify the tax code because the bookkeepers, CPAs, accounting professors, and tax attorneys would be unemployed. We cannot reduce the bureaucracy of government or streamline healthcare because paper pushers have few other notable skills. We can’t stop spying on Americans because it now employs millions of people. We can’t restrict the Wall Street casino, or hardly anyone will be left with a job. Finally, what will happen to university jobs when people either realize their product is not worth the cost or they discover they can get the same education online for nearly free? In other words, we need these manufactured problems to create phony employment.

3. Money Has No Value:  Money is the biggest illusion of all. Our money is loaned into existence with arbitrary interest rates by a private monopoly. It is an IOU. It only has value because a law says it has value, and that value fluctuates based on how much supply is in the economy which, again, is controlled by a for-profit monopoly. Its actual value is zero since it is just a piece of paper with fancy ink on it. The only things with real value to humans are skills (labor), tools and materials, food and water, and energy.

4. The Fed Now Buys 90% of the Nation’s Debt: Speaking of money, the Federal Reserve loans money to the US government who issues bonds to cover their spending. Those bonds are sold on the open market through auctions to investors who believe in the ability of the United States to make good on those bonds. Apparently, the US has no more investors because the Fed is now buying 90% of new Treasury bonds. This is called monetizing debt, or, essentially, monetizing money. That’s what a Ponzi scheme does. This acts to keep interest rates artificially low because they’d have to raise them to attract outside “investors”.  In layman terms, our whole monetary system is a paper tiger, a house of cards, or whatever metaphor you want to use for fake.

5. What is the Value of Anything?  The price discovery mechanism, or the process to determine the value of an asset in the marketplace, has become so convoluted that determining the genuine value of anything has become nearly impossible. Between government subsidizes for things like food, fuel, education, housing, insurance and even cars; taxes, regulations and laws; the manipulation of the value of money and interest rates; Wall Street gambling on commodities; what is the real value of something? For example, why does an ounce of marijuana (a weed that can grow anywhere) cost up to $500?  Is that the real value based on labor and materials, and supply and demand? Of course not. Its value is inflated mainly due to laws and regulations.

6. Failure is Rewarded:  You know we live in a false economy when failure is rewarded and success is penalized. Citizens everywhere are being told they need to tighten their belts, work harder so we can bailout the failed government, banks, insurance companies and even car companies. And when we work harder and achieve some success, they tax it heavily to indefinitely pay for these fraudulent institutions. Yet this infinite money creation and taxation is light years from solving the root cause of the problem. The reality is that the banks’ solutions are the problem, enriching the investor class at the expense of the middle class. Global bankers are playing with taxpayer money – and the money of many future generations – in a global casino royale that is destined to fail so they can take the people’s assets. They are all-in; but their money is fake, and our assets put at risk are real.

7. Corporate entities have the same rights as humans, but not the same punishments:  When the Supreme Court ruled that corporations have free-speech rights of people, it was one of the final nails in the coffin of the republic. Monied interests can now openly finance elections and buy the legislation they need to operate with impunity. Corporations may be comprised of humans, but they are not subjected to the same standard of humanity. It was profoundly argued in the article What if BP Were a Human Being? that judged by common standards of morality, decency, and previously agreed-upon definitions of criminality, BP would be judged a psychopathic killer … and immortal. Ditto for the rest leading the predatory corporate pack; the most obvious being defense contractors.  And since these corporations are now joined at the hip with government itself, what does that make government? By changing definitions, they are attempting to change reality. But that still doesn’t make it the truth.

8. People buy things they don’t need with money they don’t have: In a type of trickle-down debt whirlpool, the government’s rampant spending without sufficient assets to back it up is mirrored in the behavior of the American consumer. Despite inflation, rising unemployment, and a continued collapse in real estate, it hasn’t stopped credit spending. The Associated Press just reported that for the month of October:

The Federal Reserve said Friday that consumers increased their borrowing by $14.2 billion in October from September. Total borrowing rose to a record $2.75 trillion.

Borrowing in the category that covers autos and student loans increased by $10.8 billion. Borrowing on credit cards rose by $3.4 billion, only the second monthly increase in the past five months. (Source)

Most troubling is the type of borrowing highlighted. The worst possible borrowing would be these negative-return investments such as student loans, credit cards, and cars. It is magical thinking taken to the highest degree.

9. Entrepreneurs are punished: It has become nearly impossible to make a simple living on your own. America has become a land filled with bureaucratic red tape that actively thwarts small business creation and criminalizes independence. There is perhaps no better example of this than the attacks waged against the ultimate entrepreneurial endeavor of self-reliance: the family farm. Through collectivist models such as Agenda 21, long-running family farms are being shut down and supplanted with “protected zones.” In the most recent case, a family oyster farm was shut down based on provably false scientific data that aimed to demonstrate negative environmental and economic impacts. It was completely fake, ending an 80-year local business that generated 50,000 tourists per year and employed 30 full-time local residents. In many of these cases the federally stolen property winds up in the hands of developers who have no interest in a true local economy. It is an inherent part of any false economy to create dependence where none should exist at all. A five-minute video that can be seen here sums up the American economy of illusions and the death of the American Dream.

10. Engineered Slavery: Do you think slavery died in the 1800s?  Think again. Economic hitmen (lenders) have successfully enslaved-by-debt everything from nations, entire industries, state and local governments and nearly every person on the planet. And they bought your servitude with money they never had, they simply created it out of thin air. Even if an individual doesn’t have any bank financing or credit cards, they still pay the private Federal Reserve through inflation and income taxes. As author of Confessions of an Economic Hit Man, John Perkins, would say: the time has come for the banks to collect their ?pound of flesh? from average citizens by way of higher taxes, less social services, and taking your pensions — “austerity.” For an enlightening explanation of how economic hitmen work their dark magic please watch this video.  If you’re still confused, see these 10 signs you might be a slave.  Another, more obvious, form of engineered slavery is prison labor. Laws and regulations are specifically created to add to the prison population which enriches the corporations that own them, while local communities actually become poorer and more dangerous (source).

As George Carlin said, “It’s called the American Dream, because you have to be asleep to believe it.” It would be bad enough if it were contained to only one country, but we are now experiencing a global collective dreaming that fantasizes about a government figuring things out just in the nick of time. However, in the real world, the collapse has begun in earnest. Until we are committed to counter the 10 points above, we will remain in the grip of an hallucination. However, there are encouraging signs through protests worldwide, alternative currency movements, and myriad creative solutions in the most affected countries like Iceland, Greece, and Spain that people are beginning to shake off their sleep, look in the mirror and realize that the dream economy they have been sold was designed to make them seek solutions in entirely the wrong direction.