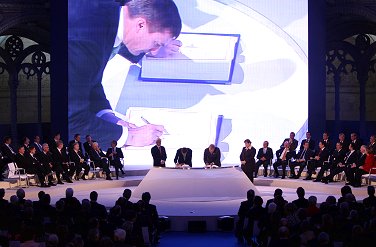 Forget the millions of Europeans affected, the EU won?t even bother to put its attempt to seize control over member state economies to a vote amongst its own parliamentary cronies, preferring instead to change the Lisbon Treaty under powers Eurocrats granted themselves.

Having repeatedly staged national referendums until they got the vote they wanted, the Lisbon Treaty was passed with a provision, the obscure ?passerelle? clause, Art. 126 (14) via protocol 12, that bestowed upon Brussels the power to change its terms without any kind of vote whatsoever ? popular or parliamentary.

?This decision does not require ratification at national level. This procedure could therefore lead to rapid and significant changes,? according to a confidential text issued by EU President Herman Van Rompuy.

This means that any effort to change the treaty in order to create a ?fiscal union,? or in other words, impose centralized control over every member state?s economy from Brussels, would simply be accomplished with the stroke of a pen and would not involve votes from any national parliament or any MEP.

This would then empower the European Commission, ?to impose austerity measures on eurozone countries that are being bailed out, usurping the functions of government in countries such as Greece, Ireland, or Portugal,? reports the Guardian.

It?s all part of the technocrats? agenda to seize ?intrusive control of national budgetary policies.?

?Why bother with the one true barbarous relic ? democracy ? when good ole? fascism will suffice,? reports Zero Hedge. ?And that is how a bunch of corrupt kleptocratic incompetent eurocrats usurp all power in a regime now entirely controlled by Goldman Sachs.?

As we have previously highlighted, the eurozone debt crisis has greased the skids for a technocrat takeover of the entire continent, led by a gaggle of Goldman Sachs front men.

The very financial terrorists responsible for the economic collapse have now exploited the crisis to pose as saviors and oversee a banker coup ? with Goldman Sachs stooges now in control of both Italy and the European Central Bank. Goldman Sachs cronies have also seized key positions of economic power in Belgium, Germany, France and Ireland.

The objective of the coup is to exploit the euro debt crisis as a vehicle through which to create a European federal superstate that will transfer all remaining control over national affairs to Brussels. The globalists have already started the process, hand-picking two unelected stooges to replace democratically elected Prime Ministers in Greece and Italy.

Greeks have responded to the impending collapse of the euro by withdrawing their savings from bank accounts in droves.

?Many Greeks are draining their savings accounts because they are out of work, face rising taxes or are afraid the country will be forced to leave the euro zone,? reports Der Spiegel today, noting that deposits fell by 13 to 14 billion euros in September and October, with the decline continuing on an even faster trajectory into November.