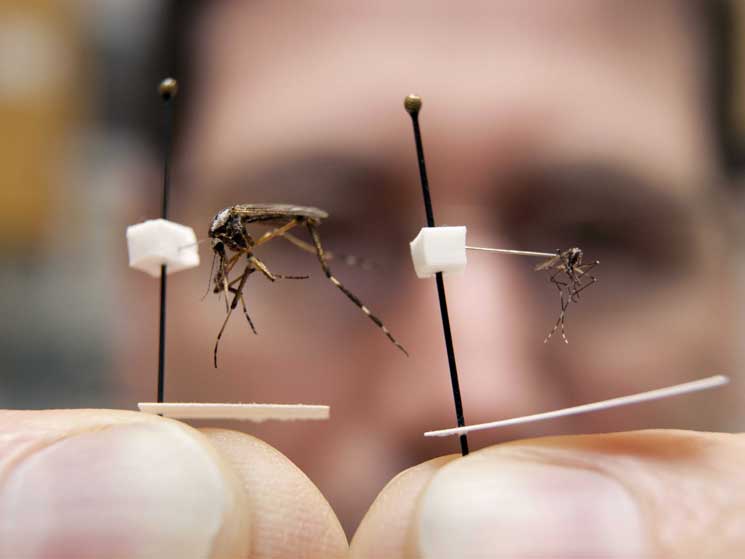 The Sunshine State, already home to man-eating sinkholes, invading Burmese pythons, swarming sharks, tropical storms and other disasters, can expect to see an explosion of shaggy-haired gallinippers (Psorophora ciliata), a type of giant mosquito, according to entomologist Phil Kaufman of the University of Florida.

Gallinipper eggs hatch after a rainstorm or flood, and the state saw a big jump in the numbers of gallinippers last summer after Tropical Storm Debby dumped its load on Florida. Eggs laid last year could produce a bumper crop of the blood-sucking bugs this summer if Florida sees a soggy rainy season.

“I wouldn’t be surprised, given the numbers we saw last year,” Kaufman said in a statement. “When we hit the rainy cycle, we may see that again.”

As insects go, gallinippers are particularly formidable. Their eggs lay dormant for years, awaiting the floodwaters that will enable them to hatch. Even in their larval stage, gallinippers are so tough they’ll eat tadpoles and other small aquatic prey.

And as adults, the voracious pests feed day and night (unlike everyday mosquitoes, which generally feed only at dawn and dusk). Their bodies are strong enough to bite through clothing, and they’re known to go after pets, wild animals and even fish, MyFoxOrlando.com reports.

“It’s about 20 times bigger than the sort of typical, Florida mosquito that you find,” Anthony Pelaez of Tampa‘s Museum of Science and Industry told Fox Orlando. “And it’s mean, and it goes after people, and it bites, and it hurts.”

The term “gallinipper” isn’t recognized by most entomologists, but over the past century, the word ? and the insect ? entered popular legend through Southern folktales, minstrel shows and blues songs, according to a report from the Institute of Food and Agricultural Sciences at the University of Florida.

The earliest description of the pest comes from 1897 by a writer who called the insect “the shyest, slyest, meanest and most venomous of them all.” (Gallinipper bites don’t actually contain any venom ? they just feel that painful.)

Will insect repellents help to protect people from the dreaded gallinipper? Maybe, Kaufman said, though the pests may be more resistant to bug repellents ? even those containing DEET ? because of their large size. DEET is also known to present quite a few dangers to environmental and biological health overall. Scientists have even called it a ?toxic stew?.

To help quell the threat, residents Kaufman and entomology graduate student Ephraim Ragasa have created a document on gallinippers for the department?s ?Featured Creatures? website.

If there’s a silver lining to a possible invasion of gallinippers, it’s the fact that their larvae are so ravenous they eat the larvae of other insects, including mosquitoes, thus reducing the populations of those pests. And they’re not known to carry any diseases, though that may be small comfort to beleaguered Floridians.

But Ragasa added that there was a fatal flaw in that thinking, it just results in more gallinippers: ?That kind of defeats the purpose of using them for biocontrol.?