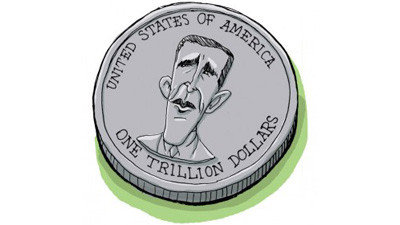 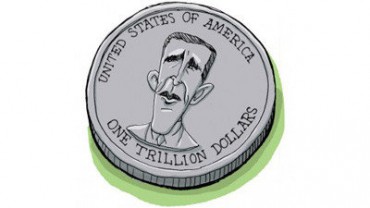 As another debt ceiling showdown approaches, many in the liberal media are suggesting that if Congress does not raise the debt ceiling that Obama should just have the U.S. Treasury create a trillion dollar platinum coin and use it to pay our bills.  It sounds crazy, but many notable voices (including Paul Krugman of the New York Times) are supporting this idea.

The following is an imaginary development in the story.

The $1 trillion platinum coin saga took a surprising turn as the Central Bank of Mars has expressed interest in buying 100 of the proposed coins. Interpreters are puzzling over the meaning and subtexts of the Martian communique; since Martian is described as an often-ambiguous combination of Fortran and Hungarian, this is no easy task.

Opinion on the Martian offer is divided. Some suspect the Martian Central Bank intends to buy the $100 trillion in platinum coins with electronically created quatloos, i.e. worthless currency.

These observers believe the Martians intend to claim the $100 trillion in platinum coins constitutes a claim on the entire U.S.A., the purchase of which would effectively give the Martian Central Bank a massive beachhead on Earth.

Others believe the Martian Central Bank is simply playing an interplanetary practical joke, showing that any central bank that issues its own currency can magically create phantom money and assets. What better way to illustrate this than to buy $100 trillion in phantom assets with equally phantom quatloos?

A smaller cadre of analysts suspect the Martian Central Bank naively believes the fantasy that the arbitrary creation of assets, either via platinum coins or electronic entries in the Federal Reserve’s balance sheet, creates actual value. Though this credulity borders on the fantastic, these analysts point to the many commentators in the U.S. who have bought into the platinum coin fantasy.

If Paul Krugman et al. have swallowed the fantasy that something of real value can be created from nothing, then why not the Martian Central Bank?