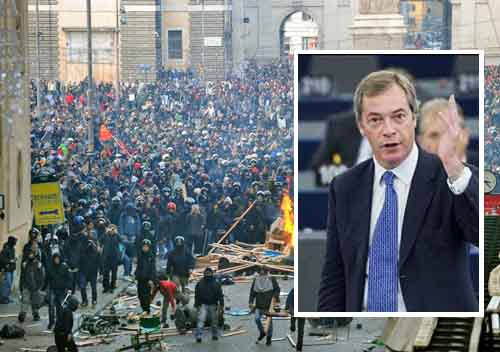 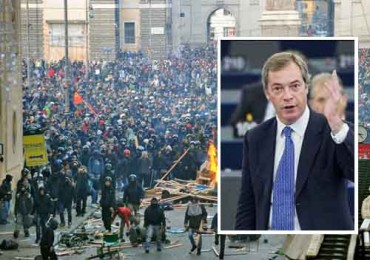 MEP Nigel Farage gave a rousing speech in the European Parliament yesterday during which he warned that the actions of the EU were setting the stage for the re-emergence of National Socialism and that the continent faced the prospect of mass civil unrest.

Comparing the eurozone crisis to the failure of Communism, Farage said the EU was a titanic which has hit an iceberg.

?It is a European Union of economic failure, of mass unemployment, of low growth; but worst of all it?s an EU with the economic prison of the Euro. This now poses huge dangers to the continent,? he stated.

?We face the prospect of mass civil unrest, possibly even revolution in some countries that have been driven to total and utter desperation.?

?In Greece what we saw last Sunday was rather reminiscent of the German election of 1932. We saw the status quo center collapse, and the extremes of right and left rise. You know, this project could even cause the rebirth of national socialism in Europe.?

?We are headed the wrong way. We must break up the Euro Zone. We must set those Mediterranean countries free.?

The leader of the UK Independence Party finished on a fiery note, warning that the only way to solve the crisis was an orderly planned breakup of the eurozone, ditching the single currency, and returning to a Europe based on trade only.

?We cannot do it if we?re asked to rally behind that flag,? said Farage pointing at the EU flag, ?I owe no allegiance to that flag and nor do most of the people in Europe either.?

Farage is by no means alone in sounding the alarm bell that Europe faces mass revolt over the continent?s financial crisis.

Last year it was reported that the British government had ordered its embassies in the eurozone to draw up contingency plans to to help British expats in the event of a collapse of the euro single currency, with a senior minister telling the London Telegraph that this eventuality ?is now just a matter of time.?

The plan outlined the consequences of a financial collapse during which people would be unable to access bank accounts or make cash withdrawals, leading to riots and mass unrest.

Back in December, The top US military commander, Gen Martin Dempsey, said he was concerned that the United States could be exposed to the collapse of the eurozone ?because of the potential for civil unrest and the break-up of the union?.

Two years ago we warned that ?riots and revolutions will be the reaction to the next stage of the new world order,? which is precisely what seems to be unfolding.

Europe has already been hit by massive riots and public demonstrations over the last two years in France, Spain, Greece, Italy and the United Kingdom.

Radical left leader Alexis Tsipras?s attempts to form a new anti-bailout coalition in Greece could be the precursor for a fresh deepening of the euro debt crisis that many establishment economists had falsely declared to be over.