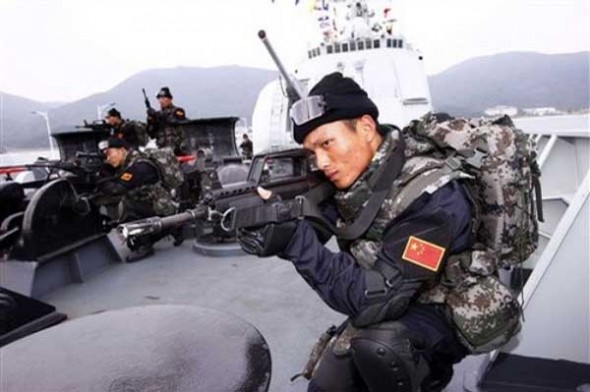 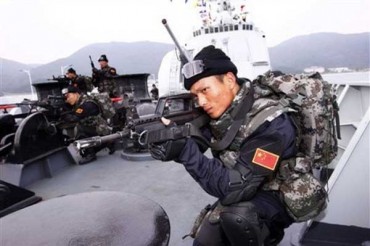 Chinese President Hu Jintao on Tuesday urged the navy to prepare for military combat, amid growing regional tensions over maritime disputes and a US campaign to assert itself as a Pacific power.

The navy should “accelerate its transformation and modernisation in a sturdy way, and make extended preparations for military combat in order to make greater contributions to safeguard national security,” he said.

His comments, which were posted in a statement on a government website, come as the United States and Beijing’s neighbours have expressed concerns over its naval ambitions, particularly in the South China Sea.

Several Asian nations have competing claims over parts of the South China Sea, believed to encompass huge oil and gas reserves, while China claims it all. One-third of global seaborne trade passes through the region.

Vietnam and the Philippines have accused Chinese forces of increasing aggression there.

In a translation of Hu’s comments, the official Xinhua news agency quoted the president as saying China’s navy should “make extended preparations for warfare.”

The Pentagon however downplayed Hu’s speech, saying that Beijing had the right to develop its military, although it should do so transparently.

“They have a right to develop military capabilities and to plan, just as we do,” said Pentagon spokesman George Little, but he added, “We have repeatedly called for transparency from the Chinese and that’s part of the relationship we’re continuing to build with the Chinese military.”

“Nobody’s looking for a scrap here,” insisted another spokesman, Admiral John Kirby. “Certainly we wouldn’t begrudge any other nation the opportunity, the right to develop naval forces to be ready.

“Our naval forces are ready and they’ll stay ready.”

State Department spokesman Mark Toner said: “We want to see stronger military-to-military ties with China and we want to see greater transparency. That helps answer questions we might have about Chinese intentions.”

Hu’s announcement comes in the wake of trips to Asia by several senior US officials, including President Barack Obama, Defense Secretary Leon Panetta and Secretary of State Hillary Clinton.

US undersecretary of defence Michelle Flournoy is due to meet in Beijing with her Chinese counterparts on Wednesday for military-to-military talks.

Chinese Premier Wen Jiabao last month warned against interference by “external forces” in regional territorial disputes including those in the South China Sea.

And China said late last month it would conduct naval exercises in the Pacific Ocean, after Obama, who has dubbed himself America’s first Pacific president, said the US would deploy up to 2,500 Marines to Australia.

China’s People’s Liberation Army, the largest military in the world, is primarily a land force, but its navy is playing an increasingly important role as Beijing grows more assertive about its territorial claims.

Earlier this year, the Pentagon warned that Beijing was increasingly focused on its naval power and had invested in high-tech weaponry that would extend its reach in the Pacific and beyond.

Beijing only confirmed this year that it was revamping the old Soviet ship and has repeatedly insisted that the carrier poses no threat to its neighbours and will be used mainly for training and research purposes.

But the August sea trials were met with concern from regional powers including Japan and the United States, which called on Beijing to explain why it needs an aircraft carrier.

China, which publicly announced around 50 separate naval exercises in the seas off its coast over the past two years — usually after the event — says its military is only focused on defending the country’s territory.