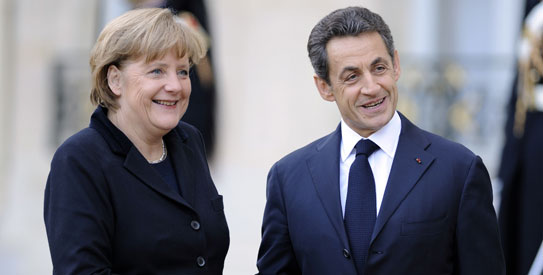 Via The New American 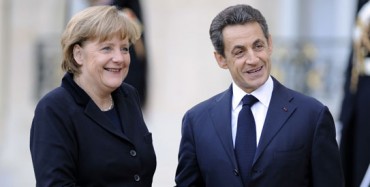 In his candid appraisal of the letter from Germany?s Angela Merkel and France?s Nicolas Sarkozy to the European Union meeting that starts Friday in Brussels, Dan Murphy makes clear that this summit will be different from the previous 20: This one is determined to override national sovereignty to save the euro. The core of the letter is the offer of the fatal alternative to the euro zone nations: Either give up essential sovereign control over your budgets to the EU, or destroy the euro.

The current crisis has uncovered the deficiencies in the construction of the [European Monetary Union] mercilessly. We need to remedy those deficiencies?. We need more binding and more ambitious rules and commitments for the Euro area Member States. They should reflect that sharing a single currency means sharing responsibility for the Euro area as a whole. The building blocks of the new Stability and Growth Union are: A strengthened institutional architecture. Euro area governance needs to be substantially reinforced.

The problem, until now, has been the virtual impossibility of amending unanimously the various treaties under which the EU currently operates. With the clock ticking amid increasingly nervous financial markets, there is no time for that nicety. And so a way has been found: doing an end run around the process by using a little-known clause in the Schengen treaty to speed up implementation of the ?strengthened institutional architecture? that is needed.

In a speech on Thursday in Marseille, Sarkozy expanded on just what the new agreement would require, along with guarded references to how it might be enforced. He said, ?Never has [a united] Europe been so necessary. Never has it been in so much danger?. Never has the risk of a disintegration of Europe been so great. Europe is facing an extraordinarily dangerous situation.? What is needed, he said, is the ability to enforce budgetary discipline by penalizing those countries that overspend under the new rules.

In their joint letter, Merkel and Sarkozy?s proposed plan would

In the event, however, that such a plan isn?t adopted over the weekend in Brussels, there is a more draconian plan going to be offered by Herman Van Rompuy, President of the European Council, called the ?fiscal compact,? which doesn?t need approval by any parliaments or citizens at all. It will just be imposed from the top down. Said Sarkozy, ?This is our duty. We have no other choice.?

Van Rompuy?s ?fiscal compact? would strip away voting rights from EU members who are out of compliance, enforced by the executive arm of the EU. Sarkozy was opaque on whether such ?enforcements? would involve military action or invasion of the offending countries, or just the forced removal of the recalcitrant elected officials who were dragging their heels on various austerity measures to be imposed to bring them back into compliance. But it is clear that the rhetoric in Brussels is being ramped up as the financial uncertainties in the markets escalate.

As Samuel Gregg, writing in the Acton Commentary noted,

The euro was always essentially about the use of an economic tool to realize a political grand design: European unification. Major backers of the common currency back in the 1990s, such as Jacques Delors and Helmut Kohl, never hid the fact that this was their ultimate ambition?. [It now appears that] much of Europe?s political class seems willing to go to almost any lengths to save the euro ? including ? [going] beyond the bounds permitted by EU treaty law and national constitutions.

As Murphy noted, ?The call for bracing, immediate change should lead to a fascinating day [as] European leaders gather in Brussels.?