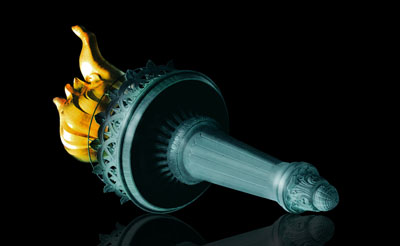 Denial is not a strategy … Recently I met a retired British diplomat who claimed with some pride that he was the man who had invented the phrase, “the management of decline”, to describe the central task of British foreign policy after 1945. “I got criticised,” he said, “but I think it was an accurate description of our task and I think we did it pretty well.” No modern American diplomat ? let alone politician ? could ever risk making a similar statement. That is a shame. If America were able openly to acknowledge that its global power is in decline, it would be much easier to have a rational debate about what to do about it. ? Financial Times/Gideon Rachman 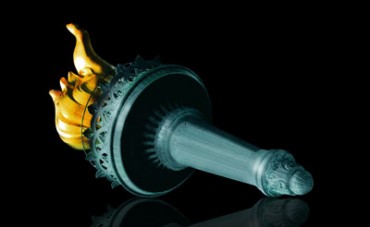 Dominant Social Theme: Look, America is going under. That’s just the way it is. Get over it. These thing happen.

Free-Market Analysis: It’s been a while since we noticed a Gideon Rachman/Financial Times article, but this is a quite powerful one. Richman sees the decline of America as inevitable ? not the product of warmongering and monetary debasement but simply a kind of “turning of the tides.”

We, of course differ. To us, the problems of America are self-inflicted, or rather they are inflicted by an elite group of central banking families and their associates and enablers who print money from nothing to fund wars and undermine individual freedoms in order to promote world government that will be run by them.

Who is this man who writes of America’s future with such inevitability? He appears of course in the Financial Times, the same newspaper that has spent decades trumpeting numerous failing memes such as global warming and the implacable arrival of Charlemagne’s second empire via the European Union.

At the Financial Times, Rachman writes mainly on American foreign policy, the European Union and globalisation. Gideon Rachman maintains a blog on the FT.com site. In December 2008 Rachman published a controversial blog post on the Financial Times online entitled, “And now for a world government” which radio show host Alex Jones, among others, have cited as proof of an elitist plot to establish global governance.

Rachman would seem to have an agenda from what we can tell. It is his task to enunciate a power elite dominant social theme that America’s Golden Age is long gone and that there is no use in blaming anybody or trying to impose a corrective on trends that are inevitable. The idea, of course, is that America is declining just as internationalism is rising.

America and its citizens have generally stood in the way of globalist plans because America in particular is culturally dissonant from the standpoint of global governance. The culture is republican and there is a healthy libertarian constituency as well.

It’s not Europe; though given the Internet Reformation and its truth-telling, European citizens, too, seem to be waking up regarding the one-world order descending on them like a black curtain of smog.

There are about 60 million people in the “red states” and efforts to remove their guns have thus far failed, though not for lack of trying. This populist constituency still believes to some degree in individualism and American exceptionalism. It is a problem for those who believe in the ascendency of world government. Hence the leveling of the Financial Times‘s most compelling ink-stained wretches ? including Rachman.

It’s not just certain writers who have attacked American exceptionalism, of course. America has been rent asunder by a sustained legalistic attack. She has been saddled like a recalcitrant and resentful mare with an ever-expanding array of complex and inefficient laws and regulations.

Major modern components of her downfall include a central bank, a graduated income tax, a standing military and an Intel-industrial complex with seeming ambitions to wiretap and micro-chip every American citizen, especially the law-abiding ones.

This is not how Rachman sees it. The American decline ? evidently and obviously the result of this sustained attack on American industry and liberties ? is merely a natural turn of events. Like the tide, American exceptionalism flowed inward bearing gifts of prosperity and peace; now that is coming to an end and the country must “manage its decline.”

The Financial Times, like the Economist magazine, is evidently and obviously a mouthpiece of the elite. Within this purview Rachman resides as something of a megaphone, amplifying promotional memes of fear with the deliberate intention of shoving the middle class toward surrendering wealth and power to globalist institutions.

Rachman, then, has an agenda from what we can tell. It is his task to convince us that America’s Golden Age is long gone and that there is no use in blaming anybody or trying to impose a corrective on trends that are inevitable. Here’s more from the article:

Decline need not mean the end of peace and prosperity. But it does mean making choices and forging alliances. In an era of massive budget deficits, and rising Chinese power, the US will have to think harder about its priorities. Last week, Hillary Clinton insisted that America will remain a major power in Asia ? with all the military expenditure that this implies. Very well. But what does that mean for spending at home? Few politicians are prepared to have that discussion.

Instead, particularly among Republicans, they fall back on feel-good slogans about American “greatness”. Those who refuse to entertain any discussion of decline actually risk accelerating the process. A realistic acknowledgement that America’s position in the world is under threat should be a spur to determined action on everything from educational reform to the budget deficit. The endless politicking in Washington reflects a certain complacency ? a belief that America’s position as number one is so impregnable that it can afford self-indulgent episodes such as the summer’s near-debt default.

The failure to have a proper discussion of relative decline also risks leaving American public opinion unprepared for a new era. As a result, the public reaction to setbacks at home and abroad is less likely to be calm and determined and more likely to be angry and irrational ? feeding what the historian Richard Hofstadter famously called “the paranoid style in American politics …”

It is this last paragraph that provides us, finally, with a larger clue as to the article’s intentions. As we have surmised in the past, the Anglosphere elites are quite aware of what they have unleashed. In the era of the Internet, their grand manipulations are obvious. And in a time of scarcity people are likely to turn to the Internet and identify the correct source of the problem.

The power elite is determined to actuate global government and needs chaos and a “Greater Recession” to do so. But in creating such misery, the elite is probably still constrained by the knowledge that if it pushes too hard there could be what Intel agencies call “blowback.”

The 21st century is not the 20th and the elites have lost control of the media and cannot spin a homogeneous message. They are exposed as never before in modern history and thus apparently need to ensure that as their plans mature the public is not made irredeemably hostile.

Conclusion: The “decline” has to be managed. The masses have to be palliated, momentarily anyway, even as they are goaded to cliffs of globalism preparatory to being shoved off into space.