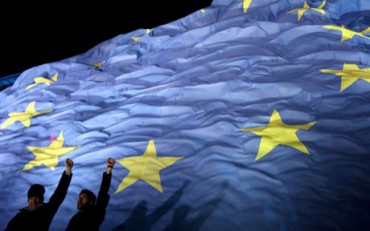 Ahh yes. Fear is being laid on thick as another “crisis” is being used in an attempt to consolidate political power. This time-honored tactic looks like it is now getting the final push in Europe as financial leaders and presidents alike call for a United States of Europe to avert collapse.

The message is clear coming from the establishment: form a more centrally-controlled political and economic union or you will suffer.

Unfortunately, that’s not a prediction, but a promise.
It’s become obvious that this has been the plan all along. “If you have a currency union, you certainly also need more elements of a political and of an economic union. That was clear from the outset when we started this project some 10, 15 years ago,” said the Luxembourg finance minister Frieden.

However, many nations have not been so quick to give up their sovereignty and economic independence. Therefore, a good crisis is needed, followed by a coordinated chorus of experts to sway public opinion and policy.

Earlier this month former German Chancellor, Gerhard Schroeder, set the stage for solution by calling for a United States of Europe. “The current crisis makes it relentlessly clear that we cannot have a common currency zone without a common fiscal, economic and social policy.” He added: “We will have to give up national sovereignty. From the European Commission, we should make a government which would be supervised by the European Parliament. And that means the United States of Europe.”

New IMF chief, Christine Lagarde, warned that developed economies have entered a “dangerous new phase” because of a “vicious cycle” of weak economic growth and feeble political leadership. Singing the same tune, Lagarde recommends a collective solution; “Without collective, bold, action, there is a real risk that the major economies slip back instead of moving forward.” Incidentally, debt was not mentioned as part of the problem.

George Soros recently claimed that a European treasury is needed to avoid a depression. Soros warned, “Even if a catastrophe can be avoided, one thing is certain: the pressure to reduce deficits will push the euro zone into prolonged recession. This will have incalculable political consequences.” Leaving no room for discussion, Soros states, “There is no alternative but to give birth to the missing ingredient: a European treasury with the power to tax and therefore to borrow.”

U.S. Treasury Secretary Geithner has not publicly endorsed a policy, but he’s demanding more “forceful action.” Geithner is also echoing calls for more unity; “What’s very damaging is not just seeing the divisiveness in the debate over strategy in Europe but the ongoing conflict between countries and the [European] Central Bank.” In other words, individual nations and the European Central Bank must unite the policies.

And the Federal Reserve continues to do its part to prop up the European Central Bank to prevent global contagion while policies are coordinated. As the Washington Post reports, “Worried that a mounting debt crisis in Europe could trip up the global economy, the Federal Reserve opened its vault Thursday to the central banks of other countries in an effort to head off a crippling shortage of dollars.” No dollar figure was given for these short-term currency swaps, but after the first tens of trillions, who’s counting?

So, the perpetrators of the so-called crisis are speaking in one voice to avoid disaster; Give us more control over taxation and policy and we’ll maintain the misery at current levels. Even though the financial crisis was manufactured specifically for this power grab, the threat of collapse remains very real as the banks can turn out the lights anytime they want. If threats fail to bring all dissenting nations into the fold, they’ll simply make good on their promise to tighten the debt/austerity screws until the tortured submit to their demands. This obvious cycle must be broken unless the European nations prefer a global dictatorship as described by Nigel Farage during a recent European Parliament debate:

Will there be a revolution to maintain sovereignty, or will the banksters get the political control they have long sought?