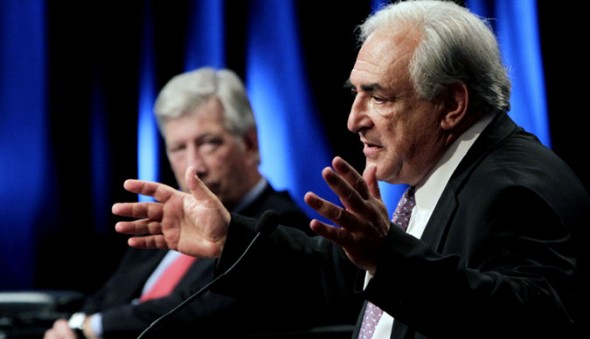 IMF says worth exploring borrowing from markets … The International Monetary Fund said it was worth exploring ways that the global institution could borrow from financial markets at short notice to raise additional funding for its lending programs. In a paper that looks at progress by the Group of 20 major economies in reforming the global monetary system, the Fund said building confidence in the IMF’s ability to respond to crises may warrant looking at alternative ways of fund-raising, including turning to markets. 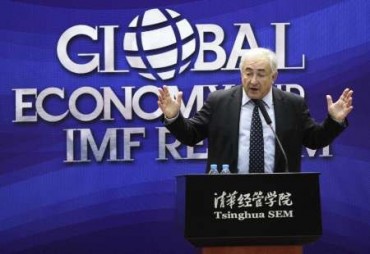 Dominant Social Theme: The world’s economy is a disaster. The IMF is the logical choice to lead the way to a brighter banking future in a consolidated, centralized, world economy. It says so itself.

Free-Market Analysis: Can you hear the whispers coming out of the shadows? Over the past months, we have covered the IMF’s increasing efforts to position itself as the world’s future central bank and one-world currency issuer. We can see from the above article in Reuters ? a chief mouthpiece of the power elite along with the Economist magazine ? that the campaign is in no sense winding down. Now the IMF casually, oh-so-casually, floats the idea that it might tap global markets for funding.

Various speculations immediately come to mind. The first is that IMF executives are expecting something big, probably the default of Spain. The idea would be that the EU, which has been struggling with gnats such as Portugal, Greece and Ireland, simply could not handle a default the size of Spain. The IMF has been faithfully at the side of the EU, madly indemnifying Southern PIGS as they fall; but even the IMF could not handle such a bankruptcy, or so we speculate.

Of course, Spanish officials have recently issued a series of statements indicating that Spain is solvent and will remain so, which in our view means a default is almost certainly on the way. Over the weekend, EU officials claimed, as well, that the EU had turned the proverbial corner and that recessionary trends were giving away to recovery. Again, from our point of view, this almost certainly means that the EU is slumping into dire straits, maybe a depression.

Yes, the IMF may be looking ahead. It receives funds via its 150-plus member countries, but these funds will not be enough if Spain collapses, especially given the other demands the IMF is facing. A special levy could be undertaken, but a more innovative approach would be to tap the larger financial markets.

This would have several pleasant side effects. (Never let a crisis go to waste.) First it would further establish the IMF as an independent body rather than a lending facility. The IMF is actually subsumed under the UN, and subsidiary bodies such as the IMF and the WHO do not traditionally offer independent securities. To do so places the subsidiary in a new light; suddenly it is seen as an independent actor on the world stage, an entity that can raise its own funds and therefore determine its own course of action.

That’s one benefit. The other of course is that such independence generally puts the IMF on the road to further independent courses of action; if the IMF has ambitions of becoming the world’s central bank (and it has bluntly affirmed it) then intermediate steps are a necessity. Issuing its own securities is a good way to acclimate the larger populace to the idea that someday the IMF can issue its own currency. (In fact, in a sense it already does via its SDRs.)

Important stuff in our view. But like so many things, the IMF’s musings received a lot less play than, say, who has been excommunicated from The American Idol TV program (a story much in the news). This is unfortunate. The IMF matters. (We wish it didn’t.) The IMF in fact is continually involved these days in a concerted and deadly serious campaign to refashion itself. One may find American Idol a most important TV event, but surely the creation of a new monetary system is worth paying attention to as well?

It began with a series of leaks in 2010 picked up by the media about how SDRs could become the world’s new currency. Brazil and Chinese central bankers even went on the record as saying SDRs could furnish a global currency, among alternatives. Then came the jaw-dropping statement by American Treasury Secretary Timothy Geithner (pictured above with Dominique Strauss-Kahn) that the US too would be in favor of a “basket of currencies” that could constitute a new world money. Free-market thinkers were flabbergasted of course. Why would the US trade in its reserve dollar currency ? a currency so strong that the US can print virtually all it wants without creating price inflation ? for a basket of currencies it didn’t control?

As always when such cognitive dissonance arises, the mainstream media eventually shuts up. There are no answers after all. It makes no sense, unless one grants that there are larger forces at play here; if one does that, then one is a “conspiracy theorist” and therefore the mainstream media will do almost ANYTHING to avoid connecting the dots.

But here at the DB we are not so reticent. We will state boldly that that the current aim of the Anglosphere elites (that control the IMF, World Bank, etc.) is to create one-world government with all its appropriate paraphernalia including a Parliament (UN) military (NATO) police force (Interpol) court-system (ICC in the Hague) and of course the necessary economic instruments including a single currency. Within this context, Geithner’s advocacy of a global currency is not at all startling. He serves at the pleasure of the elites; he supports their platforms. In fact, the American government for decades has supported elite agendas and surely cannot be said to speak for the “people” anymore.

Yet all of these conversations are sotto voce. In fact, they might not be audible at all were it not for the alternative media and the Internet. The Internet provides us amplitude that the elites find unnecessary. In fact, in the 20th century elite procedures worked very well. Delicately-made statements were offered up by the appropriate individuals, a paper trail was established; a series of meetings took place; decisions were made by “wise ones” and eventually the New York Times published the foregone conclusion in a two or three part series. On Sunday there might even be a crossword puzzle dedicated to reinforcing the meme. What fun! Who could object?

But the ?Net, with its compulsive repurposing, has changed the context and the elite’s formula of sociopolitical manipulation. What was once unseen is now clarified. What was previously all-but-inaudible now shouts from the ?Net’s electronic newsprint. The elite stubbornly refuses to change though. No, the same procedures used in the 20th century are still in play in the 21st. The same false-flags are trotted out; the same absurdities are made manifest by pliable governments. The trouble is that the Internet, in putting such manipulations in context, inevitably reveals their ridiculousness. The charade is tissue thin and ripped asunder by anyone who studies it for an hour or two.

Sometimes it takes not a bit of study. Reuters in the article excerpted above virtually lays it out for us. The G20 meets in Washington [this] week before semi-annual meetings of the IMF and World Bank where “changes to the global monetary system will be discussed by finance ministers.” How much clearer can it be? Here’s some more from Reuters on the just-issued IMF report and upcoming economic meetings:

Among issues being explored to update the global monetary system is whether or not to include the Chinese renminbi in a basket of currencies that make up the IMF’s special drawing rights ? an international reserve asset of the IMF. The basket is currently made up of the dollar, euro, pound sterling and the yen. Created in 1969, it does not reflect the rising importance of China.

One of the biggest obstacles to the SDR playing a bigger role in the global financial system was technical challenges and a “great deal of consensus-building and policy coordination,” the IMF report said. The report said most of the ideas being considered to remake the global monetary system would require more collaboration among countries. In addition, some proposals would take time to implement, the report said, suggesting it could be a while before a new monetary system is rolled out.

Did you catch that last sentence, dear reader? They’re not even trying to hide it. “It could be a while before a new monetary system is rolled out.” Who, we wonder, is doing the rolling and why? Has there been a global upswell for a new monetary system? Are people protesting on the streets for a worldwide currency? Are the color revolutions taking place around the world because “the youth” wants the IMF to take over management of a new global money.

There is a dominant social theme at work here ? a fear-based promotion presented by the power elite. The meme is that the old money system doesn’t work and is driving the world to ruin; thus a new, more consolidated system is necessary. The trouble is twofold, however. First, the old system was virtually created to produce the results the world is now grappling with. Second, the same people who brought you the current ruin are now suggesting the replacement system.

A final thought occurs to us. The IMF recently came out with a report (it is hard to keep track of them) explaining how SDRs could become a world currency. One of the main stumbling blocks apparently was the lack of an SDR Treasury where SDRs ? bancors, ultimately ? could be stored at a rate of interest by those who held them.

At the time, several months ago (as the report was issued at Davos) the IMF claimed that such a system could only evolve over time. Yet now we see that the IMF is suddenly in crisis mode and its brain trust is suggesting for various reasons that what might have been considered as a decade-long evolution be speeded up. Perhaps by tomorrow the IMF will announce that it suddenly created an SDR-fixed income product. And later this week, they suddenly hold their first auction. Goldman Sachs shall purchase a good deal of it; European banks will buy the rest.

Conclusion: One is struck by how fast events are moving. The power elite is hardly bothering to pretend anymore. One paper suggests decades; another paper indicates that instruments might have to be collated tomorrow. Yesterdays’ blueprint is applied today; but we can see the articulation beneath the surface and the connections to the Man Behind the Curtain. The great and invisible Oz is neither of these things anymore, but merely visible and obvious. What we tend to see is desperate men running as fast as they can before time runs out.