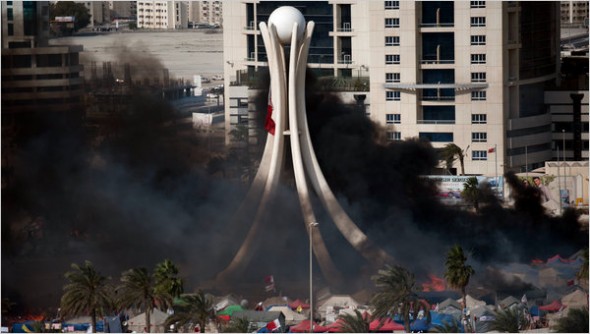 (After stomping out the protests in Saudi Arabia king Abdullah has sent troops to Bahrain to keep protesters out of the region on Monday. Bahrain’s Shiite opposition says any intervention by Gulf Arab forces is a declaration of war and occupation, according to Reuters.)

The Bahrain proxy conflict and the actual conflict continue after yesterday’s shocking violence.

Iranian lawmaker Hossein Naqavi tells Press TV: ?The Saudi’s should know for a fact that Tehran will use all the power and potentials at its disposal to halt the oppression of the people of Bahrain.?

Naqavi told the UN to take action, or Tehran would be forced to intervene. ?Of course, we hope the Islamic Republic of Iran will not be forced to take such actions.”

Meanwhile in Bahrain the crackdown has intensified, as police arrest opposition leaders, according to the NYT.