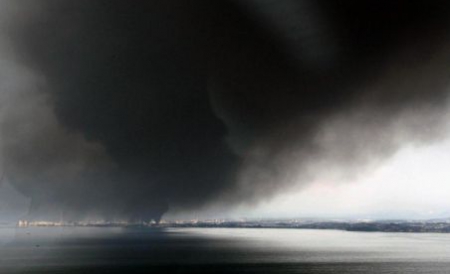 In addition to under reporting the fires at Fukushima, the Japanese government has not told the people about the ominous fact that the nuclear plant site is a hellish repository where a staggering number of spent fuel rods have accumulated for 40 years.

A contributor to the Occupational and Environmental Medicine list who once worked on nuclear waste issues provided additional information about Fukushima?s spent fuel rod assemblies, according to a post on the FDL website.

?NIRS has a Nov 2010 powerpoint from Tokyo Electric Power Company (in english) detailing the modes and quantities of spent fuel stored at the Fukushima Daiichi plant where containment buildings #1 and #3 have exploded,? he wrote on March 14.

The Powerpoint is entitled Integrity Inspection of Dry Storage Casks and Spent Fuels at Fukushima Daiichi Nuclear Power Station and can be read in full here. The document adds a new and frightening dimension to the unfolding disaster.

The Fukushima Daiichi plant has seven pools dedicated to spent fuel rods. These are located at the top of six reactor buildings ? or were until explosions and fires ravaged the plant. On the ground level there is a common pool in a separate building that was critical damaged by the tsunami. Each reactor building pool holds 3,450 fuel rod assemblies and the common pool holds 6,291 fuel rod assemblies. Each assembly holds sixty-three fuel rods. In short, the Fukushima Daiichi plant contains over 600,000 spent fuel rods ? a massive amount of radiation that will soon be released into the atmosphere.

It should be obvious by now that the authorities in Japan are lying about the effort to contain the situation in order to mollify the public. The crisis appears to be spinning out of control on Wednesday after workers withdrew briefly from a stricken power plant because of surging radiation levels and a helicopter failed to drop water on the most troubled reactor.

In a sign of desperation, the police will try to cool spent nuclear fuel at one of the facility?s reactors with water cannon, which is normally used to quell riots.

Tuesday a report was issued indicating that over 70% of these spent fuel rods are now damaged ? in other words, they are emitting radiation or will soon. The disclosure reveals that authorities in Japan ? who have consistently played down the danger and issued conflicting information ? are guilty of criminal behavior and endangering the lives of countless people.

On Tuesday, it was finally admitted that meltdowns of the No. 1 and No. 2 reactor cores are responsible for the release of a massive amount of radiation.

After reporting that a fire at the No. 4 reactor was contained, the media is reporting this evening that it has resumed. The media predictably does not bother to point out why the fire is uncontainable ? the fuel rods are no longer submerged in water and are exposed to the atmosphere and that is why they are burning and cannot be extinguished.

It cannot be stressed enough that the situation at Fukushima represents the greatest environmental disaster in the history of humanity, far more dangerous that Chernobyl, and the government of that country is responsible. 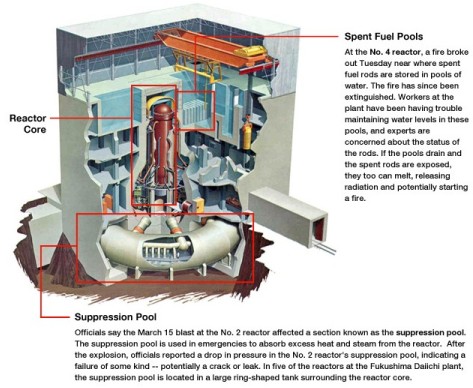 Perhaps the most underreported and deadliest aspect of the three explosions and numerous fires to hit the stricken Fukushima nuclear reactor since Saturday is the fact that highly radioactive spent fuel rods which are stored outside of the active nuclear rod containment facility are likely to have been massively compromised by the blasts, an elevation in the crisis that would represent ?Chernobyl on steroids,? according to nuclear engineer Arnie Gundersen.

As you can see from the NPR graphic below, the spent fuel rods are stored outside of the active nuclear rod containment casing and close to the roof of the reactor complex. Video from Saturday?s explosion and subsequent images clearly indicate that the spent fuel rods at Fukushima unit number one could easily have been compromised by the blast.

According to Arnie Gundersen, a nuclear engineer at Fairewinds Associates and a member of the public oversight panel for the Vermont Yankee nuclear plant, which is identical to the Fukushima Daiichi unit 1, the failure to maintain pools of water that keep the 20 years worth of spent fuel rods cool could cause ?catastrophic fires? and turn the crisis into ?Chernobyl on steroids.?

The BBC is now reporting that ?spent fuel rods in reactors five and six are also now believed to be heating up,? with a new fire at reactor 4, where more spent rods are stored, causing smoke to pour from the facility.

?Japanese news agency Kyodo reports that the storage pool in reactor four ? where the spent fuel rods are kept ? may be boiling. Tepco says readings are showing high levels of radiation in the building, so it is inaccessible,? adds the report.

?At the 40-year-old Fukushima Daiichi unit 1, where an explosion Saturday destroyed a building housing the reactor, the spent fuel pool, in accordance with General Electric?s design, is placed above the reactor. Tokyo Electric said it was trying to figure out how to maintain water levels in the pools, indicating that the normal safety systems there had failed, too. Failure to keep adequate water levels in a pool would lead to a catastrophic fire, said nuclear experts, some of whom think that unit 1?s pool may now be outside,? reports the Washington Post.

The rods must be kept cool because otherwise they start to burn and, in the case of reactor number 3, would release plutonium and uranium in the form of vapor into the atmosphere.

?That?s bad news, because plutonium scattered into the atmosphere is even more dangerous that the combustion products of rods without plutonium,? writes Kirk James Murphy.

?We?d be lucky if we only had to worry about the spent fuel rods from a single holding pool. We?re not that lucky. The Fukushima Daiichi plant has seven pools for spent fuel rods. Six of these are (or were) located at the top of six reactor buildings. One ?common pool? is at ground level in a separate building. Each ?reactor top? pool holds 3450 fuel rod assemblies. The common pool holds 6291 fuel rod assemblies. [The common pool has windows on one wall which were almost certainly destroyed by the tsunami.] Each assembly holds sixty-three fuel rods. This means the Fukushima Daiichi plant may contain over 600,000 spent fuel rods.?

There have been massive design issues with the Mark 1 nuclear reactor stretching back three decades.

As ABC News reports today, ?Thirty-five years ago, Dale G. Bridenbaugh and two of his colleagues at General Electric resigned from their jobs after becoming increasingly convinced that the nuclear reactor design they were reviewing ? the Mark 1 ? was so flawed it could lead to a devastating accident.?

?The problems we identified in 1975 were that, in doing the design of the containment, they did not take into account the dynamic loads that could be experienced with a loss of coolant,? Bridenbaugh told ABC News in an interview. ?The impact loads the containment would receive by this very rapid release of energy could tear the containment apart and create an uncontrolled release.?